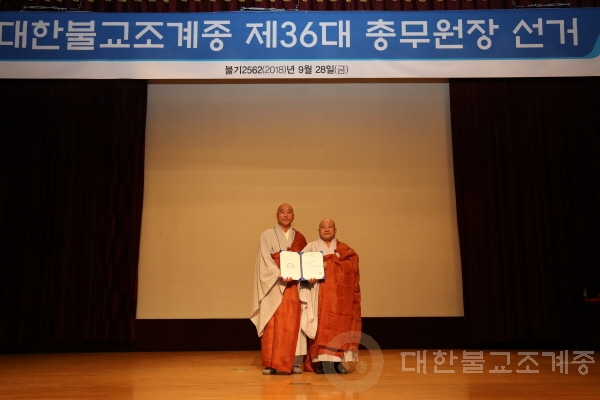 Ven. Wonhaeng, who was elected as the 36th President of Jogye Order stated that “Jogye Order will enhance its reputation as an order following Mahayana tradition through contributing to social issues.”
Ven. Wonhaeng, the 36th President of Jogye Order, mentioned in the press conference held on Sept. 28 at the lobby of the Memorial Hall of Korean Buddhist History and Culture that, “I have been chosen as the 36th President of Jogye Order by all of you who are present here. However, I feel the heavy burden of responsibility instead of joy because of the grave reality that our order and Buddhist society has to face.”
He continued saying, “Korean Buddhism and Jogye Order have shown infinite compassion and stood at the front line of brightening up the society in the past while also having contributed in inheriting the traditional culture over many generations. However, we have not actively responded to the changing reality of the society. There have been conflicts and disagreements in the order and the reputation of Buddhism today has deteriorated compared to the past.”

Ven. Wonhaeng proposed three means to solve the challenges the order is facing which are “Welfare for Sangha, Harmony within the Order and Social Responsibility.”

Ven. Wonhaeng stated that “Sangha welfare has to be fully operational to improve the spirit of community and togetherness within the Sangha community. There will be full financial support for national pension and healthcare of the monks to enhance their communal spirit. Also, nursing homes for elderly monks will be established in each district after consultation with district head temples.”.
He added, “For harmony within the order, I will lead as an example communicating with open attitude. I will create a Committee for Communication and Harmony so that the headquarters of the order can be the first to listen to all opinions. I will also approve Korean Bhiksuni Association as an official organization of the order so to listen directly to the Bhiksunis.”

Ven. Wonhaeng also discussed further related to “social responsibility” which is one of the major roles of the order. “Our order will lead the exchange and cooperation of Buddhists from North and South Korea. We will actively participate in the projects to build peace between two Koreas through activities including planning Templestay at Singyesa Temple of Mt. Geumgangsan which was reconstructed by the effort of both North and South Korean Buddhists during Kim Dae-Jung Administration. Additionally, I will promote participation of Buddhists to solve social problems and recover our reputation through contributing to the society following the Mahaya tradition.“