The ‘Sansa’ of Korea, Listed as UNESCO World Heritage Sites

Cultural Properties and the ‘Sansa’ of Korea

Sansa, Sanjiseungwon, or Buddhist Mountain Monasteries in Korea, which consist of the seven mountain temples in the country, have become the 13th Korean addition to the UNESCO World Heritage List.

Situated on Yeongchuksan Mountain of Gyeongsangnam-do Province, Tongdosa Monastic Complex of Yangsan is the 15th District Main Temple of the Jogye Order of Korean Buddhism. Tongdosa was founded in 646 by Precept Master Jajang (590 - 658) of the Silla Dynasty. This was in the 15th year of the reign of Queen Seondeok, the twentieth ruler (r 632-647) of the dynasty. This monastery is known as the Buddha-Gem temple, where the sarira of the Shakyamuni Buddha are enshrined, along with a part of the Buddha’s robe. Thus, Daeungjeon, its main Buddha hall, does not enshrine any Buddha statues. Instead, Geumgang Gyedan, an ordination platform, was installed behind the building. This platform enshrines Beopsin, which is one of the Trikaya, or the threefold body of the Buddha.

Approximately 30,000 pieces of distinguished Buddhist cultural properties are currently being housed in the millennium-old monastery, demonstrating 1,400 years of long, rich history that continues even today.

The Central Buddhist Museum in Seoul offers visitors a rare opportunity to glimpse these Buddhist cultural properties in an exceptional exhibition, highlighting the temples’ long, rich history. The 2018 special exhibition of the Central Buddhist Museum, “The Buddha-Gem Temple: Presenting Tongdosa” opened its doors on July 3 and will continue until September 30. This is the first of its kind, bringing 161 treasures of various types to Seoul: seven items designated as National Heritage Treasures and fifteen Tangible Heritage Properties from Gyeongsangnam-do Province, along with 107 others.

Most notably, museum curators have installed Geumgang Gyedan, or the Diamond Ordination Platform, of Tongdosa Temple in miniature at the lobby of the Central Buddhist Museum, so that visitors can enjoy a tour of the temple facilities in a realistic way. 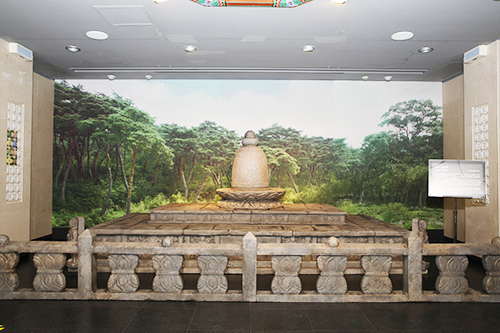 A miniature of “The Buddha-Gem Temple:

Buseoksa Temple of Yeongju, Gyeongsangbuk-do Province, which is a branch monastery of Gounsa, the 16th District Main Temple of the Jogye Order of Korean Buddhism, was established in 681 by Great Master Uisang (625 - 702) by the decree of King Munmu (r 661-680), the thirtieth ruler of the Silla Kingdom (57 BCE - 935 CE) in his 16th year of reign. After its establishment, the monastery became the headquarters of the Avatamsaka or Flower Garland Sect. Buseoksa Temple also houses numerous National Treasures and Treasures. The most celebrated National Treasure of Buseoksa Temple is Muryangsujeon, or the Hall of Infinite Life, an ancient building from the Goryeo period (918 - 1392). Muryangsujeon is the main building of Buseoksa Temple, and enshrines Amitabha Buddha, or the Buddha of Infinite Life, who abides in the Pure Land of Utmost Bliss. Muryangsujeon, built according to the Jusimpo style of architecture, with column brackets supporting the roof, is a very important structure. It is one of the oldest wooden buildings, along with Geuknakjeon of Bongjeongsa Temple in Andong-si City of Gyeongsangbuk-do Province in Korea. 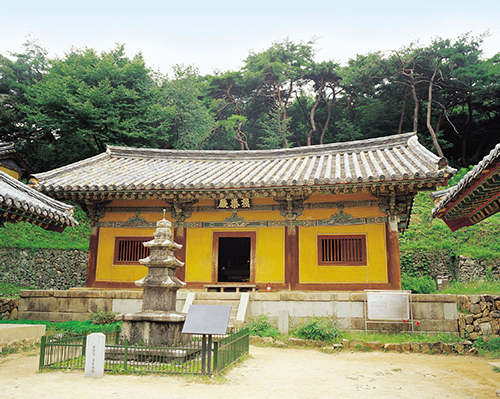 Beopjusa Monastic Complex of Boeun, Chungcheongbuk-do Province, the 5th District Main Temple of the Jogye Order of Korean Buddhism, is also known as Beopjusa of Mt. Songnisan. This monastery was founded in 553 by Spiritual Patriarch Uisin, in the 14th year of King Jinheung (r 514-540) of the Silla Kingdom (57 BCE - 935 CE). Since its founding, it underwent a series of renovations and repairs, which finally resulted in its current appearance. Beopjusa Temple houses many cultural properties, three of which have been designated as National Treasures and twelve as Treasures. This ancient monastery is home to the national treasures of Ssangsaja Seokdeung, or the Twin-Lion Stone Lantern, Palsangjeon or Wooden Pagoda, and Seokyeonji, or Stone Lotus Basin. In particular, the Twin-Lion Stone Lantern of Beopjusa, which is located between the Main Buddha Hall and Palsangjeon, is notable because it was made during the Unified Silla Dynasty (668-935), and is the oldest among lion-design carved stone structures, representing that period as a stone lantern. Among all the pagodas in Korea, Palsangjeon is the only surviving wooden pagoda as well as the tallest structure of its kind. 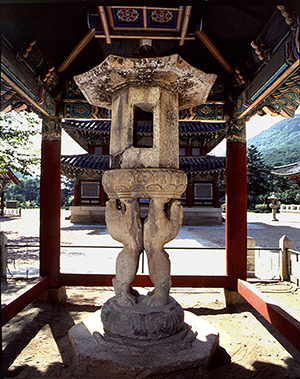 Bongjeongsa Temple, on the slopes of Mt. Cheongdeungsan in Andong-si City, Gyeongsangbuk-do Province, belongs to the 16th District Main Temple of the Jogye Order of Korean Buddhism. It is believed to have been founded by Venerable Neungin, the disciple of Great Master Uisang (625 - 702) in 672, the 12th year of King Munmu (r 661 - 680), the thirtieth ruler of the Silla Kingdom (57 BCE - 935 CE). The name “Bong Jeong” originated from the place where a Bonghwang, an oriental phoenix, stayed. The National Treasures of Bongjeongsa are all pieces of architecture that display the characteristics of wooden structures from the Goryeo period (918 - 1392) to the Joseon period (1392 - 1897). Founded in the Goryeo period, Geuknakjeon, or the Hall of Utmost Bliss, of Bongjeongsa in Andong-si City was constructed according to the Jusimpo style, which included a gabled roof atop wooden columns with entasis. Daeungjeon, the main Buddha hall of Bongjeongsa Temple, was built according to the dapo style; that is, with densely arranged layers of bracketing units. This building features the characteristics of the late Goryeo and the early Joseon period as well. The traditional pattern of dancheong, a kind of multi-colored painting, can still be seen on the interior of the structure. 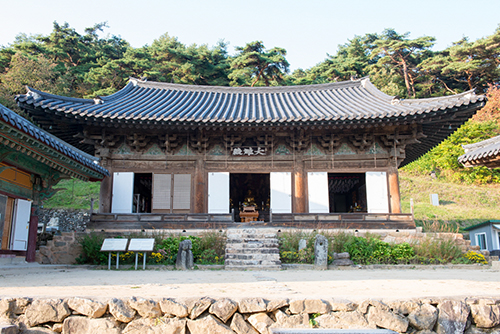 Magoksa Monastic Complex in Mt. Taehwasan in Gongju-si City, Chungcheong Province, is the 6th District Main Temple of the Jogye Order of Korean Buddhism. This monastery was founded during the Unified Silla period and had close ties with Kim, Gu, a leader of the Korean independence movement fighting against Japanese colonial rule. The temple is well-known for its Five-Story Stone Pagoda, constructed in the late Goryeo period (918 - 1392). This structure was influenced by Lamaism of the Yuan Dynasty of China (1304 - 1367). Moreover, the monastery was famed for the excellent quality of its artist monks, so much so that it used to be called Nambanghwaso, meaning “southern school of Buddhist art.” This temple produced many talented painters for generations. On the wall behind the main Buddha statue in Daegwangbojeon Hall, viewers can see the painting “Suwolbaegui Gwaneumbosaldo,” a portrait of Avalokitesvara, or the Bodhisattva of Great Compassion, dressed in white, sitting on a rock by the water, with trees in the background. This piece clearly demonstrates the tradition of the school of Buddhist art that produced many prominent painter monks. 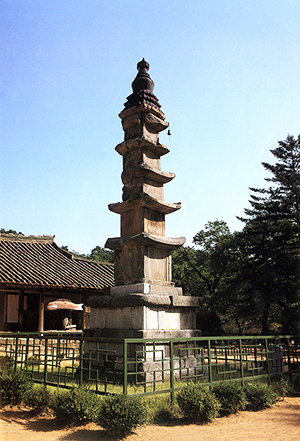 Seonamsa Temple, on the foothills of Jogyeosan Mountain in Suncheon-si City, Jeollanam-do Province, has been designated as Historic Site No. 507. Moreover, the surrounding area of two nearby temples, Songgwangsa and Seonamsa of Jogyeosan Mountain, has been designated as Scenic Site No. 65. The entrance of Seonamsa Temple is missing Sacheonwangmun, or the Gate of the Four Heavenly Guardians. As the name of Jogyesan Mountain’s highest point is “Janggunbong Peak,” which literally means “General,” there is no need for any more protection. In front of the Main Buddha hall, two three-story stone pagodas can be seen, one on the right and one on the left. Both pagodas were built in the same manner and experts speculate that they were created around the ninth century, in the mid-Silla Kingdom period (57 BC - 935 AD). In addition to these, the area features Seungseongyo, an old stone bridge; the Portrait of Uicheon, National Preceptor Daegak (posthumous title), and 33 other portraits, fourteen of which are designated as Treasures. Seonammae Plum, the tile-roofed fenced road, including about 50 trees beside Sangryangmun of Seonamsa Temple, has been designated as Natural Monument No. 488. 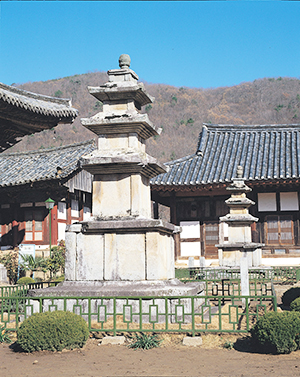 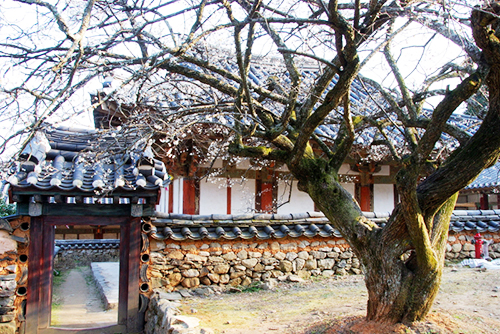 Daeheungsa Monastic Complex is surrounded by breathtaking scenery on the slopes of Duryunsan Mountain in Haenam County, Jeollanam-do Province. It is the 22nd District Main Temple of the Jogye Order of Korean Buddhism, and is well-known for its patriotic spirit. Seon Master Choui (1786 - 1866), one of the great patriarchs, is known for redefining Daedo, or the Korean tea ceremony. The monastery itself has been designated as Historic Site No. 508, and its surrounding area has been appointed Scenic Site No. 66. Among various cultural properties, Bung Mireugam Maeyeoraejwasang, or Rock-carved Seated Buddha at North Mireugam Hermitage, has been designated as a National Treasure. This seated Buddha bears distinctive features along with Gongyangcheoninsang, or a heavenly being giving an offering of a lotus flower. The sculpture’s style is quite intricate and voluminous, and has been received as an outstanding statue. The transition from the late Unified Silla (668 - 935) to the Goryeo period (918 - 1392) can be seen clearly in this statue. 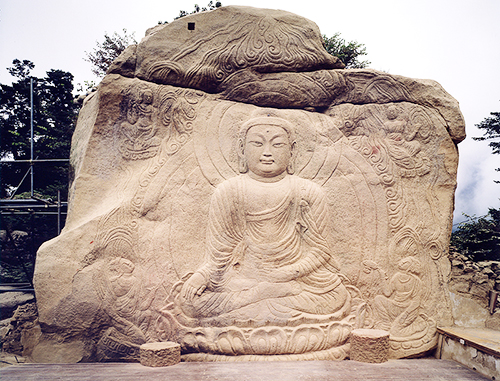