United as One in 'EDM’ on Buddha’s Birthday 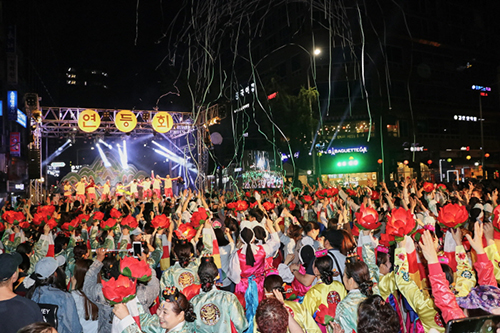 The Lotus Lantern Festival, or yeondeunghwi of the year 2019 (B.E. 2563) came to an end at 10:40 pm on May 4 amid grand fanfare and raining flower petals at the Jokgak intersection with tens of thousands of both Koreans and foreigners celebrating together the conclusion of the lantern parade, which was kicked off at Dongkuk University football field to commemorate the coming of Sakyamuni Buddha, the great teacher of humankind.

The grand finale of the parade is the dedication festivity. This year, EDM (Electronic Dance Music) was blasted to raise the excitement of the young people. Hand in hand, the celebrants enjoyed themselves in a ‘Hongdae’ club like atmosphere, dancing away the balmy Saturday night. The finale of the festival transcended the differences in nationality and age, uniting all in this wonderful festival.

The monastics and lay Buddhists bearing majestic lanterns left Dongkuk University and meandered through the streets of Jongro to reach the Jogy-sa Temple ground at around 9:30pm. Now the most celebrated day in May, dearly waited for by Seoulites and overseas visitors alike, the grand finale of the Lotus Lantern parade attracted over ten thousand people, even those who did not watch the parade earlier. With comedian Kim Joo Cheol whipping up the mood of the crowd, people started cheering and clapping. The stage opened by Yadanbeopseok’s percussion performance playing on drums, followed by the songs played by Kimseong Hyeong Band, who wrote the famous song A Letter by the Young Soldier and Kim Gukhwan, a Buddhist singer songwriter well known for his song Ta Ta Ta.

The Lotus Lantern Festival marks a time of great unity and harmony. Following the instruction by the master of ceremony, people formed five-persons circles in ganggangsulae, the traditional Korean circle dance. The young and the old, and Koreans and foreigners all held hands and danced together to the dynamic beat of the powerful music as if they were all old friends. In the compassionate luminosity of Buddha, they were all united as one beyond race, gender and age. The climax of the night was when the flower petals started raining down on the participants. Hundreds of thousands petals, made of pale pink paper fluttered down on everyone coloring the Seoul night in pink. Amid the flower rain and EDM, everyone was beautifully young again, shouting “Encore!” It was 10:40 pm, all the performances were over on the stage, yet the night was still too young and full of passion and laughter to call it a day. 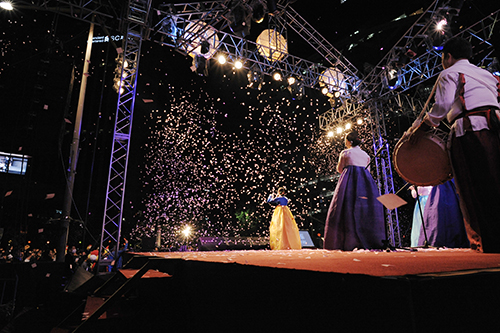