From the Korean immigration laws to how to manage temples

- "It was a big help," foreign monks and nuns say

Legal counselling for foreign monks, including matters on how to establish a temple

“It was very helpful,” favorably received by all participants

The Jogye Order of Korean Buddhism has been implementing measures to aid the foreign Buddhist monks who reside and practice in Korea, helping them better adjust to Korean life.

As part of such efforts, the Department of Social Affairs at the Jogye Order (Director: Ven. Deokjo) held training sessions on September 20 at the Culture Hall in Korean Buddhist Cultural Memorial Hall and the templestay building for foreign monks living in Korea, who have received religious visas sponsored by the temples belonging to the Jogye Order.

Among the total 63 such monks and nuns who satisfy this criterion from Nepal, Mongolia, Myanmar, Vietnam, Sri Lanka, Japan, India, Cambodia and Thailand, 54 came to the sessions, demonstrating the high level of interest the training generated. 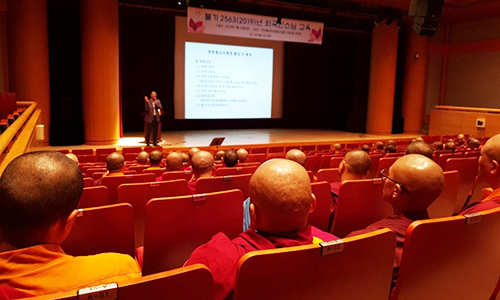 The training was divided into 2 separate sessions, depending on how the length of their stay and the type of their activities in Korea.

In the session held at the Culture Hall in Korean Buddhist Cultural Memorial Hall, Dae-sik Gwon, the Team Leader of the International Affairs Team of the Jogye Order gave a lecture on ‘dos and don’ts’ of Korea’s immigration law. The Jogye Order has been giving briefing sessions on this issue every year, but still some foreign monks fail to meet the requirements and as the result have been unable to extend their visas. After Dae-sik Gwon finished presenting the material he prepared, he had a long Q&A session and answerd the questions the monks asked in detail. 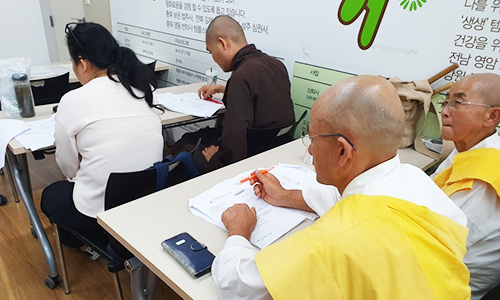 Given to the long-time residents of Korea, the other session held at Munsu Room on the third floor of the templestay building dealt with the topic of how to register and manage a temple for foreigners in Korea. This is the first time that this topic was introduced in the training, attracting much attention. The guest speaker Jeom-su Lee, a certified judicial scrivener gave a lecture on Korea’s real estate related laws on the registration of the temple property and the legal implications. Presenting many actual cases and much practical information, he helped the participants understand difficult technical and legal issues. 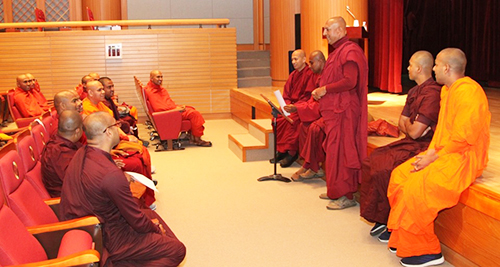 The participating foreign monks were very enthusiastic about the training, taking much note. Part of the training was also the discussion groups formed according to the country of their origin. These discussion groups were particularly meaningful because it gave them a rare chance to spend time and communicate with each other.

Ven. Dhammakiththi from Sri lanka, the abbot of the Maha Vihara in Asan said, “Korea has a sophisticated and well-developed legal system in place, which means if you do not know the law, you can inadvertently run into trouble. Today’s session was of great help. I am sure to pass on the information to other Sri Lankan monks living in Korea.”

He also added saying “The laws keep changing, so I hope this sort of training will be made available often. It is also nice to have an opportunity to get to know other foreign monks in Korea.” 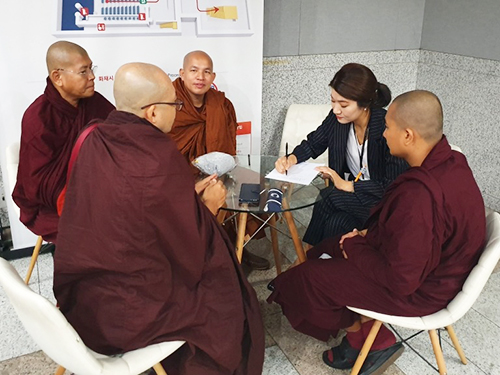 Ven. Haecheong, the vice director of the Department of Social Affairs of the Jogye Order said, “The monks participated in the training travelled from faraway to Korea to propagate Buddhism and provide spiritual guidance for their fellow countrymen living in Korea. In the spirit of ‘the whole world in a single flower,’ the Jogye Order will do its best to take good care of them while they are here.” 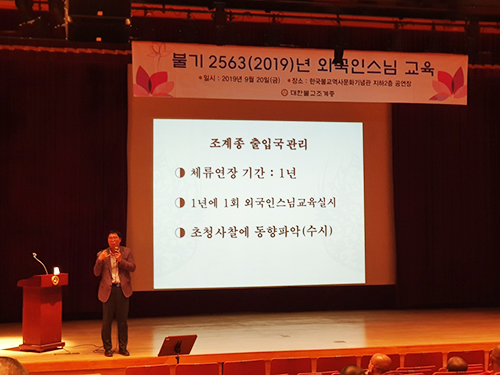