Christmas-Tree Lighting Ceremony by the Jogye Order of Korea Buddhism 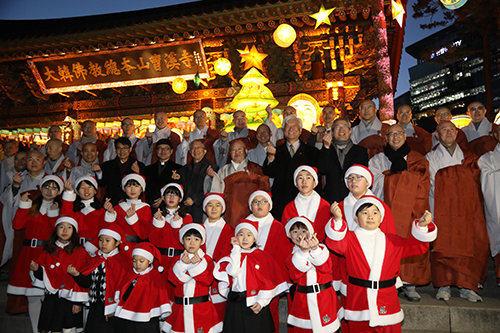 As always at this time of winter, a Christmas tree is lit up, shining over the Buddhist land to pray for religious peace and happiness. In the afternoon of December 20th, 2019, the Jogye Order of Korea Buddhism (led by President Wonhaeng) held a Christmas-Tree Lighting Ceremony as a symbol of unifying religions in front of Iljumun, the main gate of Jogye Temple in Seoul.

This tree lighting ceremony has been celebrated for the past ten years prior to the Christmas significance to rejoice the birth of Baby Jesus and to strengthen the harmony among religious groups. On the day, the event was attended by numerous distinguished monks of the order - Venerable Wonhaeng, the President of the Jogye Order; Venerable Jihyun, the Abbot of the Jogyesa Temple; Venerable Samhye, the Planning Managerof Headquarters of the Jogye Order; Venerable Tanha, the director of the Department of Financial Affairs; Venerable Deokjo, the director of the Department of Social Affairs, along with many other officials from the organization to celebrate the occasion. The prominent leaders from other religious groups including Kim, Hee-joong, the Archbishop of Catholic Bishops’ Conference of Korea, and Kim, Yeongju, the former Secretary of the National Council of Churches in Korea (NCCK) as well as Lee, Woo-sung, the official from the Ministry of Culture, Sports and Tourism joined this meaningful event to express their appreciations to the Jogye Order for taking a leading role to bring interfaith harmony.

In his congratulatory message, President Wonhaeng prayed,“I hope that there will be no more suffering from poverty and discrimination by practicing the holy will of Jesus who came to this dark and low place.” He also added,“Let us work toward building a bright and peaceful world without discrimination against east, west, race, or religion based on the bond of harmony.”

On behalf of neighboring religions, Archbishop Kim, Hee-joong, the president of the Korean Religious Peace Conference (KCRP), replied,“The Buddha\'s greatest teaching of compassion is peace, which is also the fruition of love, the most important message of Jesus Christ. Let us join together in enlightening our community moving forward with this moment of Christmas-tree lighting ceremony.” The former NCCK Secretary Kim, Young-joo responded, "I hope all religions with Buddhism share what it means to come together to embrace peace and harmony.”

Shouting out the slogan,“Peace! Compassion! Love!” the Christmas tree was lit up and an array of lighting spread compassion and love over the head temple of the Jogye Order. The popular characters“Olaf” and“Paengsu” were added visuals next to the illuminating Christmas tree. In addition to these, much-loved carols“It’s Snowing,” and“Rudolph the Red-Nosed Reindeer,” were sung by Jogye Temple Children Choir dressed in red like Santa. Despite the cold winter chills, the gathered crowds gave a big round of applaud in a great spirit.

- The Congratulatory Message to Celebrate the Birth of Jesus Christ -

We celebrate the coming of baby Jesus in the light of love and peace.

Love and peace shined upon life and coexistence.

From the dark and low place,

practice the holy will of Jesus

to love our neighbors.

No more pain in poverty and discrimination in life as he is around us.

The earth is for all mankind and all living things to coexist.

Let us live in harmony on this earth,

without discriminating against East, West, Race, or Religion.

toward the bright world based on the bond of harmony,

in respect of precious lives of all mankind,

instead of being against one or another.

Venerable Wonhaeng, the President of the Jogye Order of Korean Buddhism