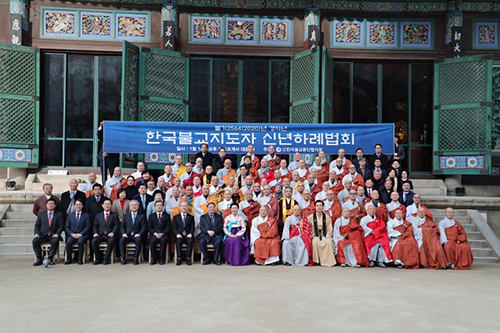 The Association of Korean Buddhist Orders (Chairperson: Most Ven. Wonhaeng, the president of the Jogye Order of Korean Buddhism) hosted a Buddhist Leaders Dharma Assembly for the New Year and vowed to continue its propagation efforts. Held at the Main Buddha Hall at Jogye-sa Temple on January 18, 2020, the Dharma Assembly was attended by over 200 guests, including Most Ven. Wonhaeng, the president of the Jogye Order and First Lady Kim, Jeong Suk who delivered a New Year’s greetings to the Korean Buddhists. Included also in the guest list are the representatives of major Korean Buddhist orders, prominent politicians, high-level government officials and the executives of various lay Buddhist organizations.

Dharma Speech by Most Venerable Wonhaeng.

Most Venerable Wonhaeng, Chairperson of the Association of Korean Buddhist Orders said in his Dharma Speech, “In BE 2563, Korean Buddhist Orders must live up to the expectations of all Korean people as well as Buddhists and together promote harmony and innovation and share the sufferings of the Korean people. While each Buddhist Order continues with its unique individual efforts, we should work together in harmony to revive Korean Buddhism.” He continued to emphasize the importance of ardent practice, saying, “My life today is the consequence of the aspirations and actions of yesterday. We should never forgo our faith in the eternal truth of the great Dharma. We should never forget the justice will prevail in the end. We must never cease ardently practicing Dharma, appreciating our current karmic positions and do our best to fulfill whatever roles given to us.”

Most Ven. Beomhae, Vice Chair of the AKBO and Chair of the Central Elders’ Council of the Jogye Oder also stressed the importance of harmonious co-existence in his opening remark saying, “I wish in the coming New Year, our society will enjoy the exchanges of healthy views. I pray the whole world will be flooded with wise words and thoughts.”

In her congratulatory remark, the First Lady said, “The current government’s goal is to make Korea a kind of nation where everyone lives as a buddha, where differences are accepted and embraced. I pray that the world envisioned in the Avatamsaka Sutrawill come true in the coming New Year,where everyone’s unique innate Buddhahood will bloom to his or her fullest potential, a world flowering and interplaying with countless shapes and hues.” During the Assembly, a scholarship fund was dedicated to Buddhist Association of College Students as well.