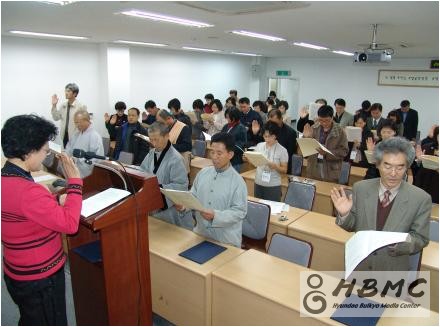 A significant step has been taken for Buddhists’ solutions toward the networking between the organic agricultural producers and their consumers. The Buddhist community is making the first move toward the launch of Buddhist cooperative association at Bulkwangsa Temple in Seoul on November 20, 2006.

At the kick-off convention, the launching committee decided to inaugurate the Buddhists’ Co-op within one year which would promote the links between the consumer groups and organic agricultural producer groups. The Co-op is to encourage the production of “green” foods and to revitalize the farming areas by opening up the Buddhist temples as direct marketing centers, boosting the consumption of organic rice for Buddha, and promoting special seasonal sales.

“We will help the Buddhists’ organizations through special sales and eventually establish a solid co-op program/academy and its partners,” said Mr. Baek Nam-Seok.

The representative of Indramang Life Community, Dobeop Sunim says, “It is shameful that the Buddhist community has not paid enough attention to farmers and farmlands although Buddhism values life and peace more than anything else, and undoubtedly agriculture and farming are the fundamentals of all life forms and peace. “We Buddhists should play a key role in supporting agriculture and the farmers,” he added.