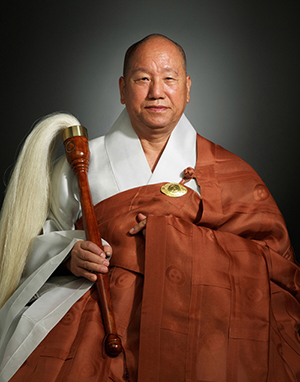 Supreme Patriarch of the Jogye Order of Korean Buddhism

If one sees how things change even in the flash of lightning,

Everything is within one’s immediate grasp whenever summoned,

Released at will whenever sent away.

Once such skills and capabilities are present,

One is the clear-eyed guardian, entrusted with the Treasury of the Dharma.

Today marks the end of the 3-month summer retreat. If you have maintained the strongresolve and heightened spirit with which you entered the retreat three months ago, practiced day and night, and indeed solved the most fundamental question of this life, only then it is the true end of the retreat. If not, the end just transforms into yet another beginning of yet another retreat. Just continue to look into the mind, over and over again.

We all renounced the secular life and entered the monastic order for one reason, and one reason only. We are here to see the true nature and achieve enlightenment. All human beings are born with the inherent Buddhahood, the same Buddha-nature, in the same way that we all have eyes, nose, mouth, and ears. But we do not have access to it, because we do not recognize it.

Everyone should let go of all thoughts of conditioned phenomena and tenaciously apply yourself to investigating thehwadu, perfectly and single-pointedly absorbed only in contemplating it. You should arouse the Great Courage and the Great Faith, determined to see the true nature and attain the great realization within three years.

That is why we must make the Great Vow in the morning and evening rituals every day. No patriarchs or bodhisattvas ever achieved enlightenment without being supported by such vows. Every day will be a brand new day if you earnestly practice by arousing ardent aspirations.

Without such ferocious courage and fervent faith, all will be easily lost even by a small storm. You cannot continue the spiritual practice when concerned about physical comforts and conveniences. You should be so entirely occupied with the single-minded concentration on thehwadu investigation that no other thought would never even arise.

Investigate your hwadu if you have already received one. If not, consider:

“What is the true self before born of the parents?”

Investigate this hwadu all day, whether you walk, stand, sit, or lie down. Arouse doubt in your mind thousand and ten thousand times a day.

MazuDaoyi was one of the greatest Chan masters of the Tang Dynasty in China, who is renowned among other things for his 84 enlightened Dharma descendants. Monks from all over the country flocked to his temple to practice most ferociously.

One day, a disciple named Fachang came to see MazuDaoyi and asked,

Fachang’s eyes opened at MazuDaoyi’s words. He left Mazu’s assembly, went to Damei (Big Plum) Mountain, and stayed there concentrating only on his practice. After 30 years passed, MazuDaoyi dispatched a monk to Fachang in Mt. Damei to ask after him since MazuDaoyi did not hear from him for 30 years. The messenger monk told DameiFachang,

“Master Mazu used to teach us, ‘Mind is Buddha.’ However, these days, he is saying, “It is neither Mind nor Buddha.”

DameiFachang replied, “Well, it is still ‘Mind is Buddha.’ to me.”

When the monk came back and repeated DameiFachang’s reply, the master said, “The plum of Mt. Damei is now fully ripe.” and officially approved of DameiFachang’s Dharma.

On one clear night, MazuDaoyi was watching the moon with his three disciples, Zhizang, Baizhang, and Nanquan. Master pointed at the moon, and said, “Tell me what you see.”

“Zhizang returns to the sutra, and Baizhang goes back to Chan, while Nanquan alone transcends all forms.”

If this mountain monk had joined them on that clear night,

Under the bright moon lying down with the legs stretched out,

In the clear wind, all is anew for ten thousand years.

Now, where does my little poem return to? Does it go back to the sutras or Seon? Or is it transcending all forms? Assembly, do you understandMazuDaoyi, how he checked the progress of his three disciples one by one?

〔After waiting in silence, Master Jinje checked his own replay when the assembly did not offer any answer.〕


The three, no, four sages leisurely roamed the temple

In the bright moonlight.

When Master Mazu told them to speak,

Each offered a marvelous virtuosity of skills.

Demi-gods and dragons bow in deference,

The Buddhas of the three times nod in approval.

For it is beyond human thoughts as it erupts in the east and withdraws to the west.