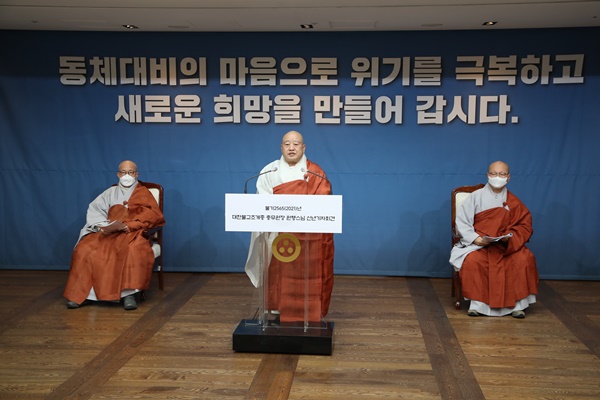 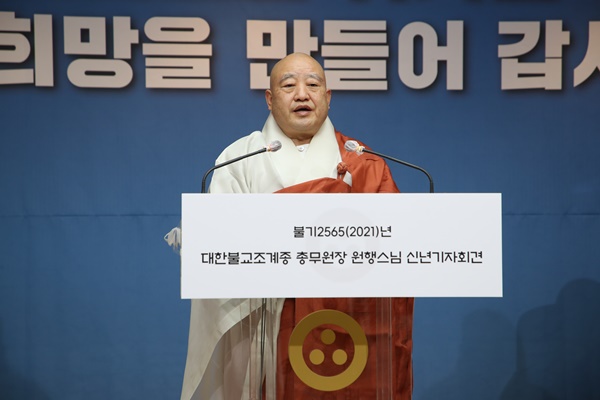 People of the Republic of Korea, and the four-fold community!

The year 2021 (B.E. 2565) has dawned, heralding the Year of White Ox.
May the epidemic end this year and health and happiness be with us.

Regrettably, the world-wide pandemic last year is still with us threatening the health and livelihood of people everywhere.
But we began to see the end of the tunnel as the news of the COVID-19 vaccine finally reached us.

However, it would still take quite some time before Korean society obtains herd immunity to COVID-19 through vaccination.
Therefore, each of us must continue to comply with recommended social distancing measures and stay vigilant about personal hygiene.

Hope still bloomed amid the darkness and distress caused by COVID-19
At the end of last year, we had glad tidings from UNESCO, which has decided on December 16 to inscribe Yeondeunghoe (lantern lighting festival, the National Intangible Cultural Asset No. 122) on the Representative List of the Intangible Cultural Heritage of Humanity.

Yeondeunghoe has been a living, breathing heritage for Korean people for over a thousand years.
By designating it as the World Heritage, the world has recognized Korean Buddhism for its innate inclusiveness in promoting the sense of community and being an inspiring influence on the zeitgeist of the nation.

It was a cause for celebration for the people of Korea as well as for the Buddhist community.

COVID-19 has stalled the life of our nation, and the Buddhist community was not free from the difficulties imposed by the epidemic.

The Jogye Order headquarters proactively prepared quarantine guidelines and swiftly deployed them to its temples across the country.
The Dharma assemblies were canceled, the mountain temples barred their gates and even Yeondeunghoe was no exception.
There has been a rush of monastics who donated back the government aid they received.

The Buddhist community took its duty to society seriously and tried its best to fulfill it as temples hosted free-of-charge templestay programs and supplied lunch boxes for medical and quarantine workers.

As a result, Korean Buddhism has gained the trust of Korean people, earning their respect as a religion that puts their health and safety ahead of its interest.

I would like to take this opportunity to thank the four-fold community for enduring inconveniences and hardships to follow the Jogye Order’s guidelines.

The construction of the main Dharma hall of Bunhwang-sa Temple and the clinic in Bodh Gaya, India is to be completed next year.
As soon as the travel restrictions imposed because of COVID-19 are lifted, an opening ceremony will be held with the members of the Buddhist community whose contribution made the project possible.

The roof-raising ceremony for Gwangje-sa Temple and the Korean Buddhist Culture Experience Center in Sejong City is scheduled to be commemorated in September this year. The construction is to be completed in 2022.

As for the construction of the 10‧27 Incident Memorial Hall, the feasibility review is commissioned to take into account the changes added to the project plan. Once all necessary discussion is completed, a new basic plan will be put together.

A steering committee will be formed this year to be in charge of establishing a Buddhist nursing home, which will be responsible for producing architectural plans.

The site for the Buddhist Cultural Heritage Preservation Center was finalized last year and the plan is to obtain the construction permit in the first half of this year and hold the ground-breaking ceremony in November.

The construction for Hoguk Hongje-sa in Gyeryong-dae where Korea’s Joint Chiefs of Staff are headquartered will start in earnest in February this year.

The foundational work around the rock-face Buddha in Yeolam Valley at Mt. Nam, Gyeongju is currently in progress. Once it is completed, the steering committee in the Jogye Order will start the discussion with the relevant government authorities to establish the area as a site for worship.

The Jogye Order laid a firm foundation for its 10-year endeavor to establish a monastic welfare system this year by launching Monastic Welfare Fund to which the monks and nuns will make regular contributions.

This year, the Jogye Order will do everything in its power to restore the dignity and spirit of the ordained Sangha by laying the solid groundwork for the sound monastic welfare system.

The Jogye Order will continue its efforts to preserve and transmit the traditional Korean culture.
Yeondeunghoe next year will be the first Lotus Lantern Festival to be held after its inscription on the UNESCO’s World Heritage List.
We will do our utmost to renew it as a festival that represents Korea’s traditional culture.

Subject to changes depending on the COVID-19 situation, the Jogye Order will consider a variety of measures to make sure the treasures of Yeondeunghoe will be shared with the citizens of the world, introducing them to its innate inclusiveness in promoting the sense of community and inspiring influence on the zeitgeist of the nation.

Templestay programs have established themselves as one of Korea’s key traditional cultural offerings to the world, and they will be expanded to further its cause of serving the public interest.

The templestay hosting temples in the mountain are making meticulous preparations to ready themselves to provide healing and relief to the body and heart of Koreans in the post-COVID-19 era.

The Jogye Order will build an ordained Sangha capable of playing a leading role in society.
Being ordained means one must have the agility to actively adjust to the changing time and society.
As such, the Order will develop educational materials on Buddhist philosophy to dedicate the merits earned by spiritual practice to the general wellbeing of the society.

Restructuring of the monastic educational system is inevitable due to the decrease in the number of initiates joining the ordained Sangha. The Education Bureau will take charge in coordinating and communicating with relevant players to come up with a reasonable restructuring plan.

The Jogye Order will realize the teaching of the Buddha by disseminating the Buddhist practice culture.
For the first time in half a century, the Order is publishing a new edition of Buddhist scriptures. We will make sure the project will be brought to a successful conclusion so that the new edition of scriptures will be used in various ways by Buddhists to aid their spiritual practice.

The scripture will help Buddhists improve their prayers and meditation practices, have pride in their identity as Buddhists, and better integrate the Buddha’s teaching into their everyday life.

The Jogye Order will strive to achieve peaceful co-existence and harmony on the Korean Peninsula.
The year 2020 is the 30th anniversary of South and North Koreans jointly applying to join the United Nations.
The spring thaw of the relationship between the two Koreans prompted by the summit meetings in the past few years has all but disappeared, and the Korean Peninsula is taut with tension yet again.

The exchanges between the Buddhist communities of the two Koreas have also ground to a half.

However, we will continue to endeavor to find peace and harmony on the Peninsula by working closely with the North Korea Buddhist Federation to proceed with various joint projects including providing humanitarian aid and COVID-19 relief.

The Jogye Order will actively participate in creating a world with no discrimination where everyone is equal.
The Buddha declared that all sentient beings are equal because we all have innate Buddha-nature.

Nevertheless, our society is still riddled with rampant discrimination fueled by ungrounded and irrational prejudices and fears based on gender, religion, ethnicity, race, physical disability, or age, often leading to exclusion of and harm to others.

The Jogye Order will focus its attention and divert available resources to facilitate the public’s consensus on and the eventual passing of the Anti-Discrimination Law so that our society will no longer be torn by conflicts and discords stemming from unreasonable discrimination.

The Jogye Order will endeavor to restore the public’s trust in religious communities.
Nothing can take priority over the task of guarding people’s health and safety, for which the COVID-19 quarantine measures are designed.
Yet, the cases of mass infection in religious institutions are still being reported, causing social unrest amid mounting concerns and criticism.

We will continue to seek ways to restore trust in religious leadership and redefine religion’s role in society at large through the channels of dialogue among religions such as the Korean Council of Religious Leaders.

The Jogye Order will find ways to transform Korean Buddhism to fit the new age.
This year is the 15th anniversary of the declaration of [Buddhist Eco Agenda 21].
We will lead Buddhists to reduce carbon emissions and implement an eco-friendly lifestyle.

Last year's drop in the total fertility rate is feared to accelerate the country's so-called demographic cliff. With lower birthrates comes a steady decline in the population professing religious faith, as well as potential candidates who wish to join the ordained Sangha, which represents the major challenge soon Korean Buddhism will face.

We will open all channels of communication with the four-fold community to listen to their opinions and facilitate the new chapter of Korean Buddhism in the coming era, and focus all our research resources and capabilities to analyze the current challenges and come up with strategies and action plans to avert the crisis.

May peace be with all living beings.
The unprecedented pandemic the world is suffering warns us about the dire consequences of humanity’s unbridled greed. It is sending an urgent message that we must pay attention to the Buddha’s teaching that all things in this universe are one.

If we fail to reflect upon the true cause of this global disaster and keep ignoring nature’s warning, if we keep looking at only the material side of things and address only the surface symptoms, it is only a matter of time before yet another, deadlier pandemic emerges and threatens humanity.

May the Buddha’s blessing be with you all,
May all beings be full of peace and life in the Year of White Ox, B.E. 2565.