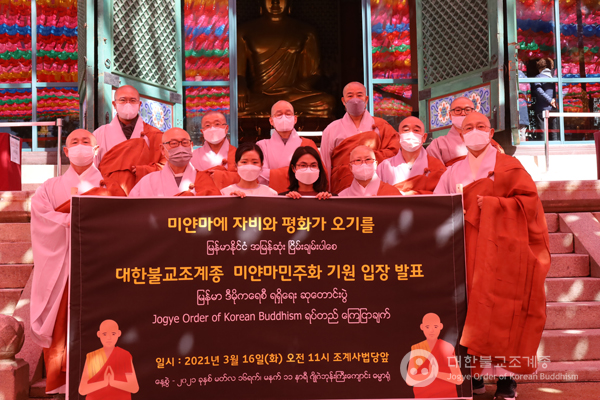 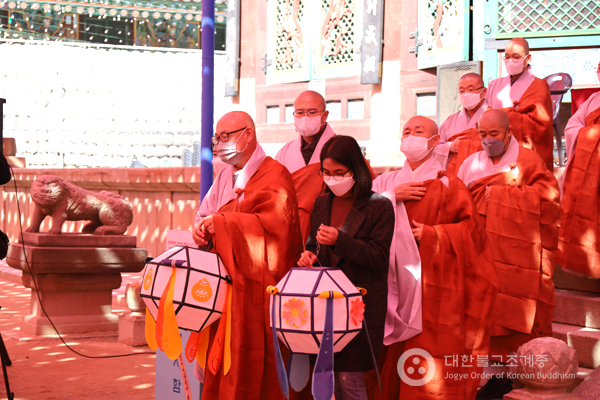 On March 16, the Jogye Order of Korean Buddhism released an official statement, praying for the democratization of Myanmar in front of Daeungjeon (Main Buddha Hall) of Jogyesa Temple.

Venerable Geumgok, Director of Administration of the Jogye Order of Korean Buddhism, made the official statement of the Jogye Order at 11 A.M. this morning. Furthermore, Ms. Hay Man Hnin, representing the Myanmar Youth Community in South Korea, tried to convey the desperate situation of Myanmar. An increasing number of casualties have raised a red flag, and she pleaded for international support from communities around the world including South Korea.

The Jogye Order’s Position
for the Democratization of Myanmar

Last February 1st, Myanmar’s military seized control of the country in a coup and countless numbers of civilians are bleeding out in the streets at this very moment. The Joyge Order of Korean Buddhism is deeply concerned about the severe brutality inflicted on the people of Myanmar by the military forces. Henceforth, the Jogye Order would like to offer our deepest sympathy for the heartache and resistance that the citizens of Myanmar have faced in their yearning for democratization, and we want to express our support for their cause.

The modern history of Myanmar has been tainted by the oppressive military rule as the world witnesses the struggles of their citizens against such powers. Calling for democracy by the people of Myanmar has been lost several times by the swift and cold hands of the military forces. In fact, this year alone, the brutal suppression has untimely claimed over a hundred innocent lives and it is said to be that thousands of people were injured.

Myanmar is the treasured country of a thousand Buddha statues and a thousand stupas. Myanmar is a place of cultivation where people from all over the world go to search for peace of mind. Thus, the Jogye Order ardently hopes that the small plea by the Myanmar Buddhist monks shall fan out throughout the world. Furthermore, we would like to offer our prayers that the people of Myanmar can reclaim their own country so that it can once again be filled with peace and compassion.

Keeping the 1,700-year-lineage of Korean Buddhist history and tradition, the Joyge Order would like to explicitly express our support for the democratization of Myanmar as follow:

-All the violence by the military forces against the civilians of Myanmar must be stopped instantly.
-We openly express our support for the pro-democratic movement by the people of Myanmar.
-We would like to ask for direct interventions from the international community for a peaceful resolution to the Myanmar Crisis.
-We would like to urge all Buddhists to raise their voices and participate in prayers for a peaceful resolution of the Myanmar Crisis.

The Jogye Order of Korean Buddhism