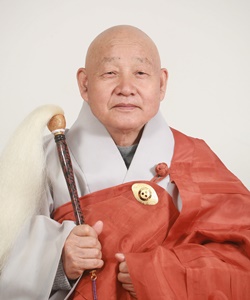 Master Seongpa, the head of Yeongchuk lineage, elected as the 15thjongjeong of the Jogye Order

Master Seongpa, Daejongsa, and head of Yeongchuk lineage was elected unanimously as the 15th Supreme Patriarch of the Jogye Order of Korean Buddhism by the Jongjeong (Supreme Patriarch) Election Committee, which was convened on December 13 to choose the successor to Master Jinje, the 14th Supreme Patriarch, whose term will end in March next year. The Election Committee was attended by 19 members of the Elders Council including the Council’s chair Master Semin, Most Ven. Wonhaeng, the president of the Jogye Order, Ven. Jeongmun, the chair of the Central Council and Ven. Boguang, the head of the Jogye Order’s Tribunals. Master Hyeonho, a member of the Elders Council was currently staying in the United States and unable to attend the Committee.

Master Seonpa joined the monastic order under the tutelage of Ven. Wolha (Myeonggeun) and received full monastic precepts from Ven. Wolha at Tongdo-sa Temple in 1960.He entered his first 100-day retreat at Bongam-sa Temple in 1998 and since then he finished 26 retreats. He served as a member of the 5th, 8th and 9th Central Council, the abbot of Tongdo-sa Temple, and the head of the board of directors of the Yeongchuk School Foundation. The status of Daejongsa was conferred on him on January 7, 2014, at Donghwasa Temple.He was appointed as the head of Yoengchuk lineagein March 2018, and has been dedicating himself to teaching disciples ever since.

Immediately after the decision by the Committee was announced, the Jogye Order of Korean Buddhism officiated a Dharma ceremony at the Main Dharma Hall of Jogyesa Temple in Seoul to present Master Seongpa to Buddha as the 15th Supreme Patriarch.

After the new jongjeong-elect offered three prostrations to the altar, Ven. Jeongmun, the chair of the Central Council stated in prayer to Buddha, “The Jongjeong Election Committee has unanimously elected Master JungbongdangSeongpa, Daejongsa, as the 15th Supreme Patriarch of the Jogye Order of Korean Buddhism. We hope that the crystalline nectar of wisdom will rain down on the three realms burning in flames that threaten the peace and life of sentient beings. May the blessings of all Buddhas, Bodhisattvas, and patriarchs be with the new Supreme Patriarch.” After his ascension was proclaimed, Master Seongpa, Daejongsa, made offerings of tea, incense, and flowers to Buddha.

Master Seongpa, Daejongsa, in accepting his appointment said, “Thanks to the elders of the Jogye Order, today I was elected to become the next supreme patriarch, although I am lacking in every way. However, the less said the better, since there cannot be two suns in the sky, and we still have the incumbent Supreme Patriarch. But if I may say a few words, I will do my best to live the teachings of the Buddha not just through words, but with actions, putting into practice what we preach. I will do my utmost to uphold the Great Compassion for all beings and the patriotic tradition of defending the nation, as we live in times of great social upheavals.”

Master Seongpa, Daejongsa, also donated 100million Korean won to Most Ven. Wonhaeng, the president of the Jogye Order to be used for the Million Vows Assembly campaigns at the ceremony.

According to the Jogye Order Charters, the supreme patriarch, or jongjeong, is the highest spiritual authority whose office carries the legitimacy of the Jogye lineage from one generation to the next. He is vested with the authority to appoint the Chief Preceptor, bestow awards, grant amnesty and mitigationof the disciplinary actions, and effect reinstatement as stipulated by the Order’s Charters. He also has the power to dissolve the Central Council in case of emergency if more than the two-thirds majority of the Elders Council members vote in favor. The supreme patriarch can serve two five-year terms.