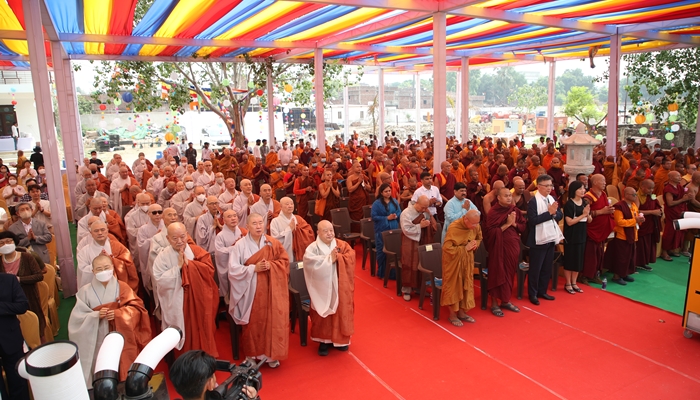 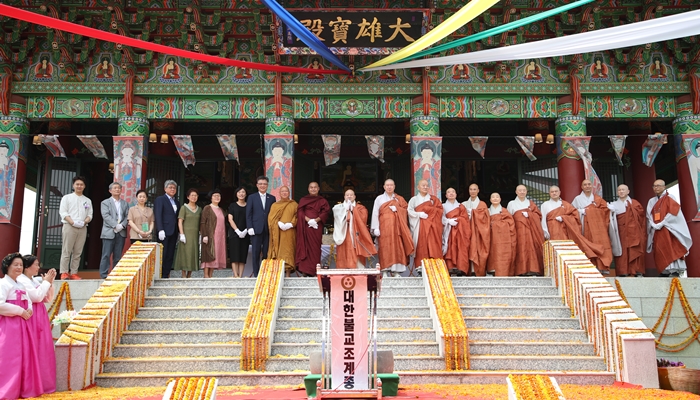 Bunhwang-sa, the first Korean traditional Buddhist temple the Jogye Order of Korean Buddhism established in India, finally had a grand opening in Bodh Gaya, the holiest site of all Buddhists where Gautama Buddha attained enlightenment. It took three years to complete the project, which was launched by the 36th Administration of the Jogye Order in April 2019.

The Jogye Order of Korean Buddhism officiated the dedication ceremony for the Main Dharma hall of Bunhwang-sa Temple on May 21, 2022 (B.E. 2566). The event was attended by a 500-strong crowd, including the president of the Jogye Order (Most Ven. Wonhaeng), the chair of the Central Council (Ven. Jeongmun), the head of the Special Overseas Headquarters (Ven. Jeongwu), the abbot of Goun-sa Temple (Ven. Deungun), the chair of the Korean Bhiksuni Association (Ven. Bongak), the chair of the Korean Reunification Headquarters (Ven. Wolu), the abbot of Bongeun-sa Temple (Ven. Wonmyeong), the members of the Central Council (Venerables Boin, Hyeil, Wonmyeong, Beopwon, Jemin, Samjo and Jingyeong), the head of the Planning (Ven. Beopwon), and the lay Buddhists led by Mr. Ju Won-sik, the chair of the Central Lay Buddhist Association. Also present on the day were Ven. Nāyaka Buddhapāla Mahāthero, the first Sati Master of Mūla Saṅgha, an international organization in charge of the construction of Bunhwang-sa, Ven. Dhammapiya, the secretary-general of the International Buddhist Confederation (IBC), the members of the monastic community in Bodh Gaya, and the Korean diplomats stationed in India, including Ambassador Jang Jae-bok.

The project started with an aspiration to build a traditional Korean temple in Bodh Gaya, the sacred site of the Buddha’s enlightenment. Tongdo-sa Temple donated 2,000 pyeong land to the project, and two Dharma sisters Seolmae and Yeonchwi gifted KW5 billion, which was quickly followed by donations from many Korean monastics and Buddhists, including Baekcheon Cultural Foundation.

Bunhwang-sa project commanded much attention among Korean Buddhists as it improves Korean Buddhism’s standing in the world, but things have been kept low-key due to the challenges imposed by the COVId-19 pandemic. But thanks to the recent positive development regarding the pandemic, the Jogye Order was able to dispatch a large-scale delegation to attend the ceremony to celebrate the historic event marking the completion and opening of the temple.

The ceremony started with the taking of refuge and the chanting of the Heart Sutra, followed by the progress report read out by Ven. Singong, the secretary-general of the Centennial Project Headquarters. Ven. Buddhapāla Mahāthero, the first Sati Master of Mūla Saṅgha, said in his welcoming speech thanking everyone involved in the construction, “I am confident Bunhwang-sa will serve not only as the center for the globalization of Korean Buddhism but also the restoration of Buddhism in India and training of the monastics as well as the Buddhists from all over the world.”

Most Ven. Wonhaeng, the president of the Jogye Order said in his dedication speech, “I rejoice at the wonderous sight of Bunhwang-sa Temple’s Main Dharma hall, standing majestically in Bodh Gaya, the site of Sakyamuni Buddha’s attaining enlightenment. Countless Koreans have crossed the ocean and flown over the sky to pay homage to holy Buddhist sites and transmit Korean Buddhism all over the world. But the construction of Bunhwang-sa Temple is a truly unprecedented event in the history of Korean Buddhism, as the ardent vows of the million faithful Koreans culminated in the glorious blossoming of the sacred white lotus, the Jogye Order’s establishment of the traditional Korean temple in Bodh Gaya.”

He explained how the seed of this project was sown 35 years ago when he came to Bodh Gaya for the first time on a pilgrimage. He made a vow there and then that one day he would see a Korean Buddhist Temple erected in Bodh Gaya, and eventually, it led to the Million Vows Assembly whose collective aspiration was channeled to and manifested as Bunhwang-sa. He concluded this speech by saying, “‘Bunhwang’ means pundarika in Sanskrit, the white lotus flower. It is the most sacred symbol of Buddhism as the flower stays untouched by the impurities in the muddy water where it grows. A white lotus is now in full bloom in Bodh Gaya, a spiritual refuge for Buddhist pilgrims and practitioners. It will function as a place for worship and prayer, and also serve to foster community spirit among the local population.”