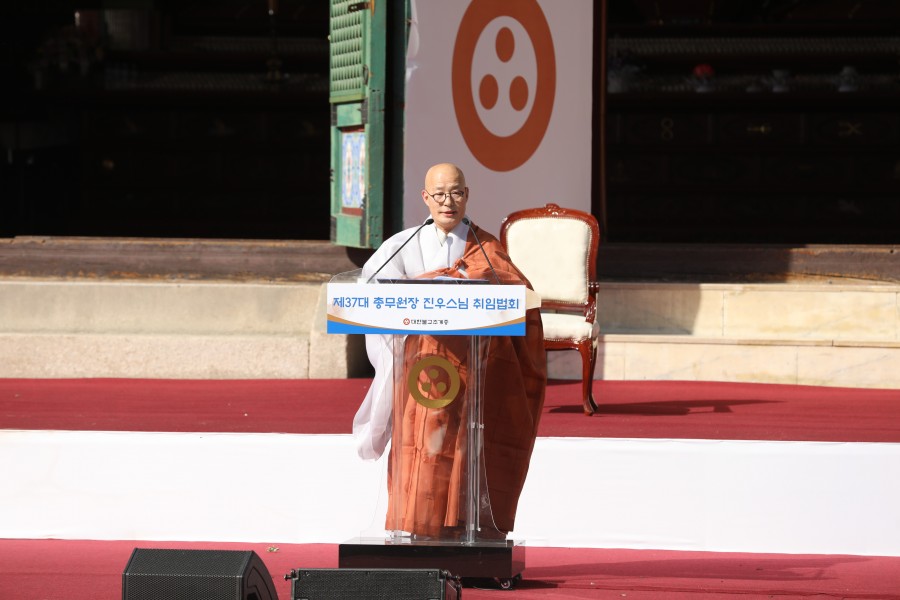 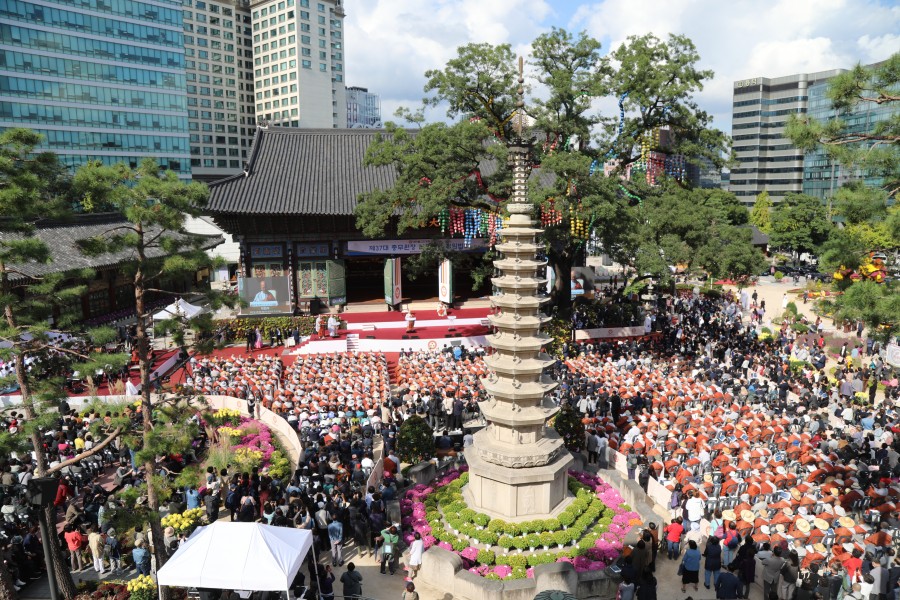 Most Ven. Jinwoo was sworn in as the 37th president of the Jogye Order of Korean Buddhism on October 5 at Jogye-sa with a 10,000-strong crowd bearing witness.

“I hereby declare that the 37th administration of the Jogye Order of Korean Buddhism is officially launched, and it will live by the Buddha-dharma, embrace the suffering of all sentient beings, stand by all beings of this world and open a new historic chapter of the Buddhist renaissance."

On October 5, 2022, Most Ven. Jinwoo was inducted into the office of the president of the Jogye at the inauguration ceremony held at Jogye-sa Temple and took his first step to open a new historic chapter of the Buddhist renaissance. Participating in the ceremony were: the members of the Elder’s Council including its chair Ven Daewon, daejongsa, the members of the Central Council including its chair Ven. Jeongmun, the chief of the Tribunals Ven. Bogwang, the head of the Dharma Propagation Bureau Ven. Beomhae, the abbots of the key Jogye Order temples including the chair of the Association of the Headquarters Temples Ven. Deokmun, the executives of the headquarters of the Jogye Order, the representatives of other Buddhist orders belonging to the Association of the Korean Buddhist Orders including the president of the Cheontae Order Ven. Muwon, the chair of the Lay Buddhist Association Yunsik Ju, and the journalists from Buddhist media including Hyungu Kim, CEO of Beopbo Daily. The ceremony was also attended by: the members of the National Assembly including Jinpyo Kim, the chair of the National Assembly, Jinseok Jeong, the chair of the People Power Party, and Jaemyeong Lee, the chair of the Democratic Party of Korea, high-level government officials including Bogyun Park, the minister of Culture, Sports and Tourism, Seoul City major Sehun Oh, and the representatives of the seven major religions in Korea including Hongjeong Lee, the secretary general of the Association of the Korean Christian Churches. The street in front of Jogye-sa was filled with monastics and lay Buddhists who came to witness the inauguration of a new Jogye Order president. The Jogye Order estimated that the four-fold community participating in the ceremony numbered well over 10,000.

“Throughout its long history, the principal value of Korean Buddhism has always been to benefit all beings,” said Most Ven. Jinwoo in his inauguration speech. He emphasized the social responsibility of Korean Buddhism by saying, “Attaining enlightenment did not stop Sakyamuni Buddha from spending the rest of his life on the road disseminating Buddhism to benefit all beings by saving them from suffering and bringing peace to the world. Under my leadership, I will do my best to make Korean Buddhism trusted, respected, and loved by the public.”

“To make Korean Buddhism trusted by the public, I will reinforce communication with society at large based on spiritual practice and wisdom,” said the newly appointed president of the Jogye Order. “Buddhism strives to achieve peace of mind, and we exist as a religion to share how to achieve that with as many people as possible.” Specifically, his administration will undertake to△translate the sutras into a more modern language befitting the digital era of the 21st century △make Buddhist practice more accessible by developing meditation classes and walking pilgrimage routes△Aim for a society based on justice by taking more seriously the religion’s social role in preserving the culture and environment and protecting the socially disadvantaged.

“To make Korean Buddhism respected by the public, I will do my best to preserve the Buddhist culture and its heritage, which represents the essential part of Korean traditional culture, so that the whole country can enjoy cultural benefits,” said Most Ven. Jinwoo. To this end, policies will be implemented to△ develop and share a variety of content using the heritage of traditional Buddhist culture△make sure that the forests surrounding traditional Buddhist temples are fairly and accurately assessed as they form a core of Korea’s natural and cultural resources and make the forests more available to the public by developing hiking and pilgrimage routes in them.

“There should be a drastic change of direction in the Jogye Order’s propagation policies to make Korean Buddhism beloved by the public, as it is the calling of our time,” said the 37th president of the Jogye Order. He stressed the importance of△ making the Buddha’s teaching easily available to the younger generation to soothe their anxiety about the future△modernizing the traditional Buddhist practices so that more people can apply spiritual practices more easily to their lives to reduce the feelings of uncertainty and fear that many people suffer these days. “We will establish a world-renowned meditation and healing center associated with beautiful mountain temples in Korea, which will upgrade the Jogye Order’s templestay program to the next level. They will not only be places for high-quality rest but also venues that provide much more comprehensive experiences of meditation, healing, and culture, meeting the diverse needs of the public,” said Most Ven. Jinwoo.

Furthermore, he committed himself, for the prosperity and peace of the country, to the cause of uplifting the rock-face Buddha found in Mt. Nam in Gyeonju, which has been neglected for over a thousand years. He also promised that he would work with the government and politicians to find ways to improve or lift the legislative restrictions imposed by the National Park Law and the Cultural Heritage Protection Law. “A new administrative system that can support each district with their unique propagation effort would be established as part of the extensive reform of the Jogye Order management system.” Said the new president.

“A single grain contains the entire universe, and everything in the universe must work together to have a single blade of grass sprout,” said Most Ven. Jinwoo. “I will remember this noble truth in every moment and pour my heart and soul into my work so that I can have open-hearted communication with everyone, propagate a true Dharma and open a new historic chapter of the Buddhist renaissance.”

H.E. Jungbong Seongpa, daejonsa, the supreme patriarch of the Jogye Order, in his Dharma talk read byVen Daewon, daejongsa, the chair of the Elder’s Council on his behalf said, “Most Ven. Jinwoo has been an outstanding practitioner and has selflessly served the Jogye Order with small and large responsibilities over the years. As such, he is eminently qualified to be elected as the new president of the Jogye Order, a position of high authority as well as weighty obligations. Practicing Buddha-dharma and propagating it are the two pillars of the Jogye Order.” He asked the new president to “make sure the banner of the Buddha’s authentic wisdom, passed down to us unbroken from the Buddhas and patriarchs since it came to Korea, would fly high again, and maintain the harmony within the monastic Sangha so that the Buddha’s Pure Land will be realized on this very earth.” The patriarch said, “The Jogye Order must be reborn as a source of joy and hope by transcending all conflicts through repentance and tolerance and by rallying everyone in the Jogye Order to contribute as much as their wisdom and capability allow.” He emphasized, “All sentient beings will find a haven in you, and your example will be the essential foundation upon which the Buddhist renaissance will take place.”

President Seokyeol Yun, in the congratulatory remark read by the minister of Culture, Sports and Tourism said, “Throughout its 1,700-year history, Korean Buddhism has stood by the Korean people through all the ups and downs of the country. Korean Buddhism has always mobilized itself in times of national crisis without hesitation and devoted itself to saving all beings with Great Compassion. Most Ven. Jinwoo is now committing himself to the Korean Buddhist renaissance which will perpetuate the glories of the past into the future. I am sure that he will play an important role in helping Korea overcome the crisis and open a new era of hope, as the Buddhist masters before him have done.”

“Due to the respect Most Ven. Jinwoo commands through his spiritual attainment and distinguished administrative career, he is inducted into the office of the president of the Jogye Order without a challenger, which is a first in the history of the Jogye Order,” said Jinpyo Kim, the chair of the National Assembly. “I am confident that he will contribute greatly to resolving social conflicts and bring harmony and unity to the nation.”

After the congratulatory remarks, Ven. Bongak, the chair of the Bhiksuni Association read the aspiration prayer on behalf of the four-fold community present at the ceremony, vowing to “communicate open-heartedly with our neighbors, dedicate ourselves to propagating the Buddha-dharma, and share the sufferings of the people so that we can work with you on the grand journey toward the Buddhist Renaissance.”

The 2-hour inauguration ceremony ended with the assembly chanting the Four Great Vows. After the official part of the ceremony was finished, Most Ven. Jinwoo came to the special stage set up on the street outside the Jogye-sa Temple to personally greet and thank the crowd gathered there to celebrate his inauguration and the launch of the 37th administration. The crowd consisted mostly of the members of the monastic sangha and lay Buddhists from outside of Seoul. “I will do my best to unite the four-fold community to propagate the Buddha-dharma and revive Buddhism in Korea so that we can bring peace and ease to the rest of the nation,” said Most Ven. Jinwoo in his address to the crowd, amid their enthusiastic cheering and applause.