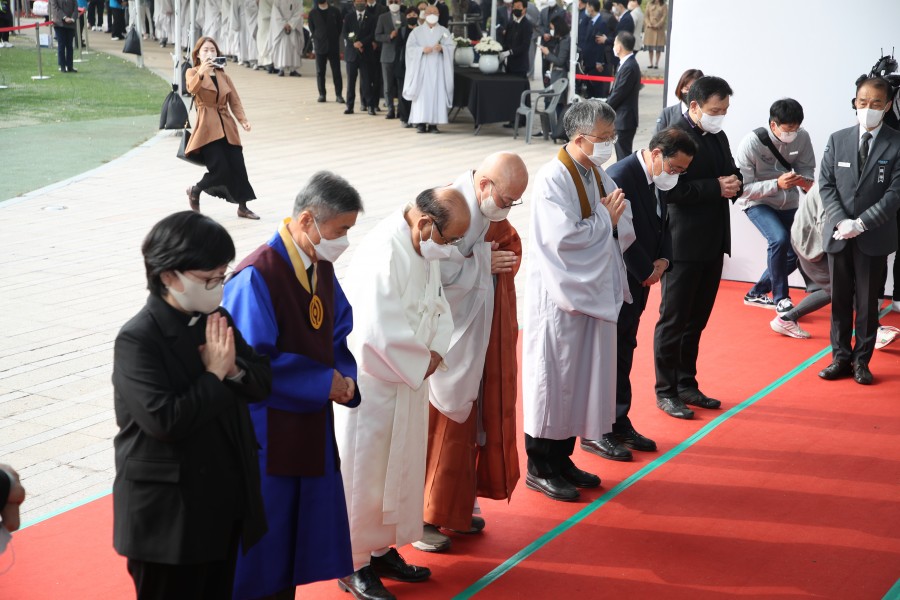 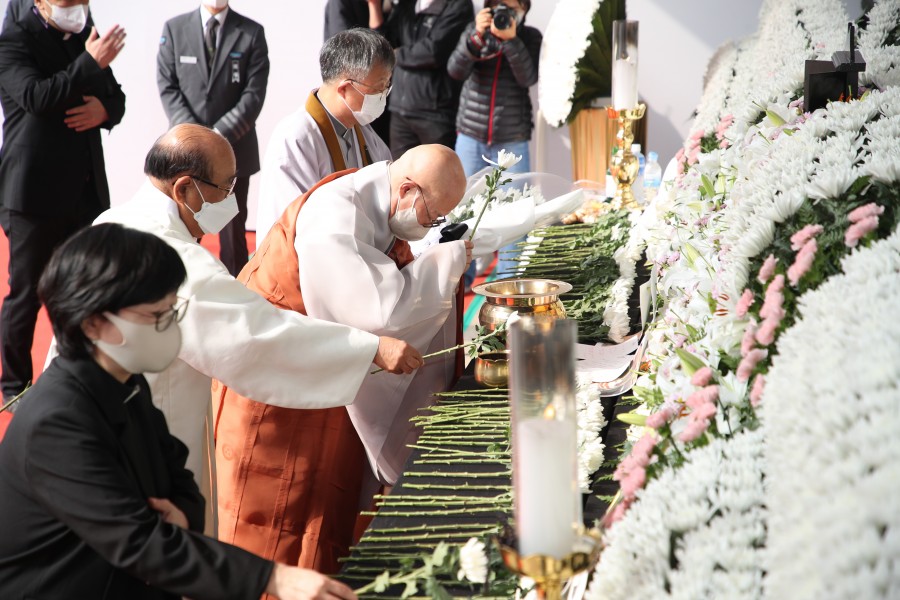 On November 1, 2022, four days after the last weekend’s deadly crowd crush in Itaewon, Most Ven. Jinwoo, the president of the Jogye Order of Korean Buddhism paid a visit to the altar set up at Seoul Plaza in front of City Hall with other religious leaders of the Korean Conference of Religions for Peace (KCRP), an interreligious forum representing the seven major religions in Korea.

Most Ven. Jinwoo was joined by Son Jinwu, the head of Confucian Sungkyunkwan, the representative chairman of KCRP, Archbishop Kim Heejung, the chairman of the Committee for Promoting Christian Unity and Interreligious Dialogue under the Catholic Bishops' Conference of Korea, Rev. Lee Hongjeong, the secretary-general of the National Council of Churches in Korea (NCCK), Na Sangho, the president of Won Buddhism, Park Seongjong, the president of Cheondoism, and Kim Haryeong, the chairman of the Association of Korean Native Religions.

The religious leaders first laid flowers and bowed their heads in silent prayer in a secular ceremony. Then, Most Ven. Jinwoo chanted the Heart Sutra with Ven. Hosan, the Director of General Affairs Office, and Ven. Seonghwa, the Director of Planning of the Jogye Order to guide the souls of the victims to be reborn in the Western Paradise.

“It is truly horrific. I am devastated by the terrible loss of life,” said Most Ven. Jinwoo to the reporters after his prayer. “The whole country, including religious communities, must be mobilized to ensure such a disaster would never be repeated.” He continued to say, “My heart goes out to the victims who lost their lives in this tragedy. All of us in society must take every precaution we can think of to prevent such senseless deaths from ever happening again.” He wrote on the visitor’s log, “No more tragedy like this. I pray for the victims to be reborn in the Western Paradise.”

“We must mourn and pray for the victims first before we assign the blame,” said Son Jinwu, the head of Confucian Sungkyunkwan, the representative chairman of KCRP. “It is time to unite in the sense of community to lessen the burden of grief for the bereaved families of the victims by bearing it together.” Na Sangho, the president of Won Buddhism also expressed sorrow for the victims by saying, “The loss of young lives is truly heartbreaking. Our first duty is to the victims and their families. We must remember our thoughtless words may be deeply hurting those who lost their loved ones in this tragedy.”

Before the religious leaders visited the altar, 40 lawmakers from the People Power Party led by its floor leader Ju Hoyeong also came to Seoul Plaza to pay their respect. “As soon as the period of mourning is over, the People Power Party, along with the experts, will do our utmost to find optimal legislative measures to prevent an accident like this,” said Ju Hoyeong. “We will focus on the protocols and manuals for crowd management when there is no clear organizing entity of an event.”

Another mourning altar was set up on November 1 at Noksapyeong Station Plaza near Itaewon. More altars are to be established at various locations across Korea in Anyang, Pyeongtaek, Daegu, and Gangwon as many victims traveled to Seoul from different parts of the country to join the festivity in Itaewon. A period of national mourning has been declared, and for the five days it would last, Seoul City also ordered the flags on its buildings to be lowered to half-staff.