Dharma Speech of the Most Venerable Dolim Beopjeon,   the Supreme Patriarch of the Jogye Order of Korean Buddhism

The catch words: You are right! No, you are wrong! 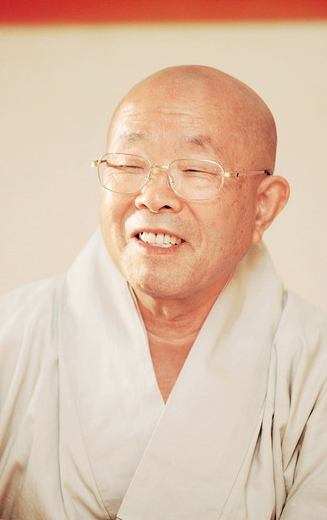 eceptor Janggyeong Hoihwi with his huge Six-ring Dharma Staff in his hand. When the Master arrived, he walked around the preceptor’s meditation platform thrice, shook his staff once, and then stood there without a word.
The Preceptor says, "Good! Very Good!

In truth, the responses of "right" and "wrong" of both preceptors, Janggyeong and Namjeon, only revealed immaturities of their practices, caught in the trick of the Master Magok. Master Seoldu Junghyeon was right when he made a comment on the mistakes of both preceptors. The Preceptor Janggyeong’s left eyesight was not quite clear. So was the right eyesight of the Preceptor Namjeon. Both preceptors had sharp knives hidden between their eyebrows, but their three-inches long tongues made great mistakes of raising the wind of hollow thunder.

If both preceptors were truly awakened, they should have given the Master Magok thirty blows of bludgeon before his making the three rounds of courtesy, because there is nothing to be right and wrong in the ultimate sense of truth. The owl and cock only see daylight and the darkness of night differently according to their nature, not because there really are daylight and the darkness of night.

If one is irresolute and does not know what to do when one hears the wrangling noise in the compound of the great monasteries, one would surely see the ghost of the skull in the broad daylight. One should be, therefore, very careful not to fall into the trap of the argument of right and wrong.

About this koan, Master Cheonjang Boweol, the Dharma disciple of the great Master Gaeseon Seonseom said, "Regardless of what he heard, either "right" or "wrong," the Master should have made another round of the meditation platform and left the place."
Upon this occasion, I would like to ask the practitioners who are about to enter the Summer retreat. What is the merit of making "another round of the meditation platform?" I hope all of you to ponder over this question leaving the argument of right and wrong.

One should never say what is right and wrong.
The sea of the four quarters are calm and quiet after the ebb tide.
Tradition of the house of dharma staff is higher than twelvefold grand gates.
Yet why is it so quiet and empty when the way to capital is wide open? 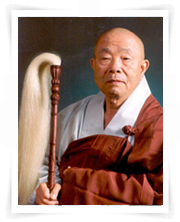 On the Opening Day of the Summer Retreat, 2551 (2007)
The Most Venerable Supreme Patriarch
The Jogye Order of Korean Buddhism