Knowing which end is up can secure enlightenment

Martine Batchelor’s “Women in Korean Zen: Lives and Practices” tells the story of the 10 years the author spent as a Buddhist nun in Korea. Now married and living in France, Batchelor decided to tell her story because of a Korean nun she met. “Tiny and stooped, but remarkably energetic,” Sunim Sunim captivated the author’s imagination. 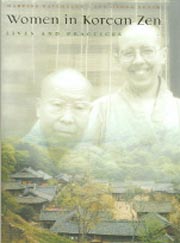 “The more I got to know her, the more I appreciated her way of being and that made me want to know more about her 60 years of life as a nun. I also thought her story would be inspiring for other people,” Batchelor writes.
The book is divided into two parts. The first describes the author’s experience and the second is Sunim’s biography. While Batchelor’s story offers some insight into a foreigner’s experience in Korean Buddhism and into Buddhism itself, the second story is the more compelling one.
Sunim was born the daughter of a poor farmer. Her mother died when she was 9, and her brokenhearted father was unable to care for his children. Sunim was so despondent she wanted to die.
At that point forces she describes as greater than herself intervened.
“Life became very difficult, and finally it was so bad that I decided to kill myself,” Sunim told Batchelor in the first-person account of her life. “But as soon as I made that decision, I heard a voice from the sky say, ‘Your affinity with the Buddha is great. Why end your life?’”
Sunim heeded the voice and at the age of 18 became a novice. She spent 15 years taking care of an elderly nun before a desire to delve into meditation drove her to search out a meditation hall where she could practice.
Thus this tiny nun began the nomadic existence practiced by the Buddhist clergy in those days, moving between temples as the three-month meditation seasons came and went.
At the Kyongsongam nunnery under the tutelage of Master Man’gong, Sunim received a rebuke that led to her first real breakthrough in meditation.
Batchelor explains in the first part of the book that Buddhist clergy each receive a hwadu when they become nuns or monks. The hwadu is in the form of a question and becomes that person’s focus for meditation.
Batchelor’s own hwadu came from the following story:
Long ago in China, Zen Master Chao-chou (778-897) gave a talk on Buddha-nature.
“The Buddha,” said Chao-chou, “has ascertained that every being is endowed with the Buddha-nature.”
A monk pointed to a dog in the courtyard and asked: “Does this dog have the Buddha-nature?”
To which Chao-chou replied: “No!”
The hwadu that goes with the story is “Why did Chao-chou say ‘No!’?”
When Sunim asked for a hwadu, she waited 30 minutes for a reply before deciding she would not be answered and decided to leave.
The master, who had been sitting with eyes closed, suddenly opened them wide and shouted, “Since you are incapable of knowing where is the head or the tail, what kind of hwadu are you talking about?”
Sunim was crushed by this and carries her defeat to another temple.
After three weeks of intense meditation, she has a breakthrough. “Suddenly a single thought pierced right through me, all the way up to the top of my head. The thought was so powerful that a voice came out of me, which said, ‘Since originally there is no head or tail, where could either of them be?’”
She described her experience to another monk who told her she was on the verge of a breakthrough.
Sunim kept practicing and found: “I now had no distracted thoughts at all. My mind was absolutely clear and quiet, and great faith was arising. I was pleased with the faith, which poured out of me, and could think of nothing except practicing meditation.”
The account of Sunim’s life includes many kinds of riddles that led to her breakthrough. The questions are only surpassed in their abstractness by their answers, and to the uninitiated, give a taste of the intense practice of Buddhism.
Batchelor’s easily-read book holds appeal for both someone interested in Buddhism or in general Korean culture. It can be found in the library at the Korea Foundation Cultural Center.