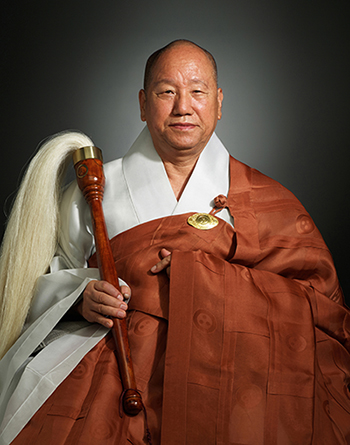 [Supreme Patriarch Jinje lifted his dharma staff in front of the audience as he mounted the dharma throne.]

There is no conflict amongst the Buddhas and patriarchs.

Yet, those who have come after them waste time arguing about right and wrong.

As the path to truth grows wider, the emperor’s orders are no longer required,

And when the world becomes truly pure, people will not even bother to praise the peace.

Today marks the end of the 2019 summer retreat that has spanned the last 3 months. Humans mark day and night and the passing of the seasons; yet time just flows over such manmade concepts, never bound by artificial borders. Thus also flow life and death, ceaselessly and seamlessly passing us by. The end of the retreat should not mean you can set aside your hwadu. It is no excuse to become lazy or complacent.

The disciples of the Buddha, those who aspire to learn his truth, must take to heart how blessed they are to have been taught the Buddha’s path, and to have patrons who allow them to focus on walking that path. They should not limit themselves to such trivial matters as food, clothing, or weather. Only from the appreciation of the Buddha and one’s patrons do great faith and aspiration spring forth, without which you cannot devote yourselves to constant practice.

You cannot discover the arising of doubt by chance; nor is it guaranteed that faith and aspiration will simply arise with the passing of the years. Neither will you have a single thought focused on your hawdu flow ceaselessly by chance. Also, be absolutely sure to remember that great courage and determination to never turn back or give up will come only when you pray to the Buddha and check your progress day and night.

Practitioners often come and ask me, “How can I improve my practice?” But few actually follow what I teach. To seek an easy way to see your true nature and instantly attain realization is like wanting to climb a high mountain while your body is going downhill. You have to deeply reflect upon why so many fail to achieve this single-mindedness focused only on a hwadu, despite many hours and days sitting and practicing; then you must repent.

If you already have a hwadu, just continue to hold and question it. If you do not, take this one: “What is my true self before I was born of my parents?” Put all your mind into questioning it ceaselessly, whether you are coming or going, standing or sitting, eating or walking. You must doubt your hwadu tens of millions of times a day until your single-minded focus on this hwadu flows incessantly like a river.

There was a Seon teacher named Zhaozhou during the Tang Dynasty. One of the greatest Seon masters of all time, Zhaozhou became a monk at the age of 10 and went to see Master Nanquan. Lying on the floor, Nanquan received Zhaozhou and asked him a question.

“Where did you come from?

“I came from Auspicious Form Temple.”

“If so, have you ever seen an auspicious form?”

“I have not, but I have seen a reclining Buddha.”

He said that because Nanquan was lying down.

Nanquan was surprised to hear this reply and sat up. He asked another question.

“Are you a sramanera with a master, or one without?

“Who is your master?”

A protégé, already a sage as he was, Zhaozhou had arrived.

Impressed, Nanquan called the vice abbot of the temple and said,

“Give this child a clean room and attend to him.”

Once you truly see your true nature as taught by the Buddha, it is so absolute and complete that you will never again be lost in ignorance, even when you are reborn into a different body. Forever luminous, the Dharma of seeing one’s true nature will reveal itself naturally and spontaneously. Zhaozhou, even as a 10-year-old sramanera, already knew the Dharma and knew there was actually nothing to be realized.

Zhaozhou studied under Nanquan as his disciple for many years. He attained the “true eye” that sees Truth and succeeded Nanquan in his lineage.

One of Zhaozhou’s disciples practiced diligently for 3 months under his tutelage. On the last day of the retreat, he came to take his leave of the assembly. Zhaozhou said to him:

“One picks and picks the willow leaves.”

Why did Zhaozhou say, “One picks and picks the willow leaves” after the disciple said he would not go? This response is extremely difficult to understand. If any of you here put all your effort into solving this phrase and solve it, you will spontaneously attain 1,100 different kinds of samadhi and the boundless truth of the subtlest Dharma at the same time. Then you will become the honored one, alone in heaven and on Earth.

Assembly, do you understand the meaning of Zhaozhou’s reply, “One picks and picks the willow leaves”?

Not even a black stallion that runs 1,000 leagues a day can follow.

About 100 years ago in this country, there lived a sage named Mangong. A great Seon master, he was always teaching his assembly how to practice correct Dharma.

One day, it so happened that a bird flew from the edge of the eaves when he was sitting on the veranda floor and chatting with his disciples. Mangong asked,

“How many leagues will that bird fly a day?”

No one dared answer except Bowal, who rose and gave this astute reply,

“It didn’t even lose a couple of steps.”

When Mangong entered parinirvana, the assembly decided to have Seon master Gobong as their senior teacher because he held the true Dharma. One day, as a new retreat season began, the assembly asked for a Dharma talk to mark the beginning of the retreat. When Gobong stood up and was about to ascend to the Dharma seat, Geumo came up from behind, grabbed the edge of Gobong’s robe and said,

“Seon Master, please say something before you mount the seat.”

“Please say something before you mount the seat.”

Forty years after this Dharma exchange took place, Hyanggok, this mountain monk’s Dharma teacher, asked me about this great phrase.

“If you were Gobong, what would you have said when Geumo grabbed the robe and asked you to say something before mounting the seat?”

As soon as this mountain monk heard this question, Ibellowed a thunderous “AUUK!”

Hyanggok heard my roar and said,

“If you roar like that it will blind all the people in this world.”

He was telling me that my bellowing“AUUK!” was the wrong answer. So I immediately answered,

"It is this humble monk's fault."

To which Hyanggok came with a wondrous rejoinder,

"It is this old monk’s fault."

Now, that is how a Dharma exchange should be conducted!

I should have said something when this mountain monk was told to speak, but instead I boomed“AUUK!” to jar his wisdom eye, meaning I was trying to test whether he truly understood the truth of this great phrase or not.

Of course, Hyanggok assessed my reply correctly and clearly knew where the answer came down to. That’s way he said, “If you roar like that it will blind all the people in this world.”

You are a truly enlightened teacher who can lead thousands of people on the path, but only if you have no hesitation to call it black when seeing black, and white when seeing white. How can you fulfill the role of a teacher when a huge mountain is blocking your view?

When this mountain monk immediately owned up to his mistake by saying"It is this humble monk's fault", Hyanggkok instantly countered it with, “It is this old monk’s fault.”

How marvelously and easefully the Dharma flows back and forth!

As such, the fathomless depth of the Dharma of the south meets that of the north.

Do see this Great Phrase as it is!