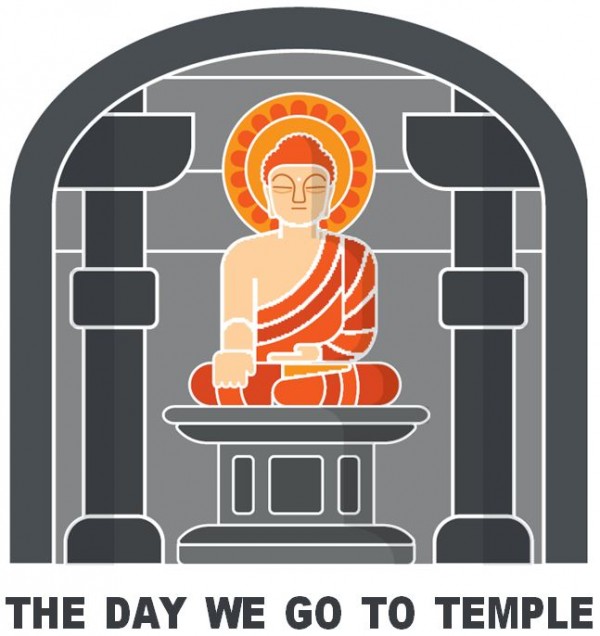 Seongdo Jaeil, the Day of Enlightenment

The enlightenment of Buddha signifies the transcendence of human boundaries. It is a sacred declaration of the return of the values of the celestial world to human beings.

After his renunciation, Siddhartha Gautama first went to learn about ascetic practices from Bhaggava. These ascetic practices served as a way to subject one’s body to suffering in order to free his or her soul, which had been bound by the body. Explicitly, from a dualistic view of the flesh and spirit, it is the practice of focusing on the soul intrinsically. However, in Siddhartha Gautama’s case, as he practiced, he gradually became immune to all physical suffering, and the practice was nothing but troublesome. Consequently, as he realized that the practice offered no benefits leading toward a spiritual awakening, he turned to meditation.

Accordingly, Siddhartha Gautama went to practice first with meditator Alara Kalama, and next with Uddaka Rāmaputta after leaving Bhaggava, and was able to reach the highest meditative state. Meditation allows one to achieve happiness through self-examination, but in one of two categories: either mortification or its opposite, pleasure. Nevertheless, he once again came to realize the limitations of the practice. He knew that he couldn’t live in such a way, even though happiness could be achieved as long as he was in a meditative state. In other words, he believed the practice should enrich one’s life, not create happiness separated from life itself. This realization about meditation again gave him another opportunity to search for a new way to practice.

This was how he chose to live for six years on his own path of suffering. Unlike his previous practice with Bhaggava, he incorporated methods of controlling his food intake and fasting. Regardless, the practice was fruitless, again leaving him with nothing but his weakened body.

Therefore, he put an end to six years of this practice. This announcement was made as he took a symbolic bath in Niranjana River (尼連禪河). The act showed his firm determination to pursue the middle path by denouncing incorrect paths.

The greatness of the Buddha lies in his bold willingness to denounce his birthright as the future ruler of his kingdom, when he realized that such a path was meaningless to him. Additionally, he moved on to another method of practice after recognizing the fruitlessness of six years of asceticism. The fact that he was a man of action, following his firm conviction, made him great.

Sujata’s Offering and the True Awakening

With his weakened body, he was swept away by a current while taking his bath in Niranjana River, but fortunately he spotted an extended branch by the river bank, and managed to grab onto it and climb out. As he sat by a nearby tree with his fragile body, Sujata, a daughter of a rancher, was passing by with boiled milk porridge. As she saw him there, she offered him the porridge. Nourished by this food, Siddhartha Gautama regained his strength.

When translated, the name Sujata is Seonsaengnyeo [善生女], which means a woman with good karma [善業]. Rather the name of the specific person, it is better to assume that she is one who did the best deed she could, helping Siddhartha Gautama attain his enlightenment.

With this offering, it is said that he regained his strength. Nonetheless, it would be very difficult to say that he regained his all of his energy at once after six years of limited food intake and fasting practice. We can probably assume that he received several offerings there. It is uncertain whether the offerings were repeatedly given by one person, Sujata, or if there could have been other people. The idea that he regained his strength all at once from the offering of Sujata can be interpreted as a symbolic expression to give more emphasis on his awakening to the beginning of the next phase of his life, completely abandoning ascetic practice.

The bath and the food he took at that time would have been unthinkable for an ascetic practitioner. As the suffering of the body was considered the most important method in asceticism, his five fellow practitioners left him with terrible disappointment because of these incidents. After their separation, they all went to practice in Sarnath, the north-east part of Varanasi, India. However, when they heard that Siddhartha Gautama attained supreme enlightenment [正覺] in Bodh Gaya, they became his first five bhikku disciples, who each achieved their own enlightenment after listening to his teaching.

He moved to Bodh Gaya in Gaya after regaining his strength. There, he saw a young man mowing the grass nearby, and asked for salt reed-grass [吉祥草, Desmostachya bipinnata]. As he placed the grass under a Pipphala Bodhi tree, he began his practice with his death vow that he would not get up unless he attained enlightenment. Finally, at dawn on December 8, his firm determination paid off. He attained true awakening, which nobody had ever achieved before.

The Awakening of the Middle Way between Pleasures and Suffering

The enlightenment that the Buddha achieved was only possible on the middle path. Specifically, it was Gorak Jongdo [苦樂中道], the middle path between extreme pleasure and asceticism. This was confirmed through the teaching he gave to his five disciples in Sarnath. Gorak Jongdo [苦樂中道], which refers to taking the middle way; free from any attachments and absent of either extreme: neither pleasure nor asceticism. As we breathe naturally without realizing it when everything is right, the middle path is the recognition of one’s existence through all things effective and appropriate.

According to the Samyukta Āgama [雜阿含經], Connected Discourses, the Buddha described enlightenment as a log drifting along in a river heading towards an ocean without being distracted by either bank, and free of attachments. One of the action items on the middle path is the Noble Eightfold Path [八正道]. If the Four Noble Truths express the organizational structure of the Buddha’s awakening in the reality of human life, the Noble Eightfold Path articulates the practical application of the middle path. These two teachings are considered the core principles, neither of which existed before Buddhism. Furthermore, they are also the most important teachings of the Buddha. Their importance is clear to us, as these two were taught as the first turning of the wheel of the illustrious Law [初轉法輪] to Buddha’s five disciples in Sarnath. They were also the last teaching given to Subhadda in Kusinara. In other words, the Four Noble Truths and the Noble Eightfold Path are the pivotal principles of Buddha dharma. After attaining true awakening in Bodhi Gaya, he was filled with the inner joy [法樂] for a while. At that time, legend says that Brahma, the creator god of the Trimurti of Hinduism, asked [梵天勸請] the Buddha to change his mind, and share his teaching for the deliverance of people. This occurred seven times for seven days.

Buddhism commenced when the human, Siddhartha, was reborn as the Buddha. He was an exemplary figure among all practitioners, as he transcended the limits of a human being through six years of ascetic practice. Therefore, Seongdo Jaeil, his enlightenment day, is not only the most important day in Buddhism, but also the cause for a grand celebration.

Close to the day of the Enlightenment, the practitioners who were ordained following the teaching of the Buddha performed the Buddhist ceremony, honoring his great conviction. Starting on the first day of December, seonwons, meditation centers, and Buddhist universities in the Jogye Order begin special, rigorous practices. This eight-day period of zealous practice from the first to the eighth comes from the tradition of the Dhyana School of Seon Buddhism.

A seonwon is a unique practicing area dedicated to exploring hwadu, a questioning technique, aimed at achieving enlightenment with Seon Buddhism. A Buddhist university is a basic educational institution for training seekers to officially become monks. If a seonwon is a community entirely dedicated to awakening, a Buddhist university is an organization for confirming a practitioner’s resolution toward attaining Buddhahood.

A vigorous practice session starting on the first day at Seonwons and Buddhist universities is considered an extra session. Thus, it is called Gahaeung Jeongjin [加行精進], the enhancement of intensive meditation, or Yongmaeng Jeongjin [勇猛精進], an ardent effort or exertion, contemplating the Buddha. During this meditation, as practitioners shun sleep in favor of meditating towards their awakening, it is also called Bulmyeon Bulhyu [不眠不休], no sleep no rest, or Cheolya Jeongjin, intensive all-night meditation. As monks try to overcome sleepiness, they meditate and walk in turn. Since sleepiness is extremely difficult for humans to overcome, this kind of practice shows one’s ardent effort as well as the most virtuous devotion toward the Buddha at the same time.

The Ceremonial Rituals of Seongdo Jaeil

Next, the official title of “Beopseung Gyedo [法性偈圖]” is Hwaeom Ilseung Beopgyedo [華嚴一乘法界圖]. Venerable Priest Uisang (625-702) wrote an abstract while studying the sixty volumes of the Avatamsaka Sutra, the Flower Garland Sutra, under the teaching of Venerable Zhiyan [智儼, 602-668] at Mount Zhongnan in China. When he came back to the Shilla Dynasty (57 BC-935 AD), he gave Beopseung Gyedo [法性偈圖] to his disciple, as a way of sanctioning the transmission of dharma [信標]. It holds not only the essence of the Flower Garland Sutra in the Mahayana Buddhism, but is also an iconic expression. Therefore, the circling of “Beopseung Gyedo [法性偈圖]” refers to the embodiment of the truth in the sutra.

Surrounding “Sipbaramil Jeongjindo [十波羅蜜精進圖],” and “Beopseung Gyedo [法性偈圖],” is an articulation of the observation of the Paramitas, and the awakening to the teaching of the Flower Garland Sutra. This is a reminder ritual of the two main wings: Bangpyeon [方便, nekkhamma], renunciation; and Banya [般若, paňňā], wisdom, in Mahayana Buddhism on the day of Enlightenment.

Nabpatjuk [臘八粥] refers to a porridge eaten on the 8th of December. Traditionally, we call this period Dongjitdal, November, the month of the winter solstice, and Seotdal, December, the last month of a year, that is, Nabwol [臘月] in Chinese.

During the time of the Buddha in India, nomadic culture was ubiquitous, because agricultural farming was difficult in East Asia. For that reason, nomadic porridge; that is, milk porridge, was offered. Milk porridge was seen as the highest offering, as it could build up the most virtuous deed at that time, containing various fine ingredients like pine nuts, chestnuts, red beans, peanuts, and dates as well as other dried fruits. It is also called Chilbojuk [七寶粥], seven-jewel porridge, or Ohmijuk [五味粥}, five-flavor porridge.

The tradition of having Nabpatjuk emerged from the time of China’s Tang Dynasty (618-907). At first, it began on the day before the Enlightenment Day, closely followed by Cheolya Jeongjin. Later on, the tradition gradually expanded to the general public, as practitioners and devotees shared Nabpatjuk after the offering was made to the Buddha on Enlightenment Day.

During the Song and Ming Dynasty periods, the tradition was extremely popular, as much as the modern tradition of Koreans eating red bean porridge on the winter solstice. Thus, sharing Nabpatjuk became a grand festival commemorating the noble deeds of the Buddha. In addition to this, on the winter solstice, calendars were traditionally given to vassals, and so all government officials were given the porridge as well. Later on, it came to be widely practiced among the nobility, who eventually began to share porridge with commoners.

As sharing Nabpatjuk settled into place as a traditional custom, elements of commoners’ celebrations also began to emerge, like people competing for the best-tasting or best-looking porridge, as well as predicting fortunes through the porridge. However, in Korea, the festival culture of Nabpatjuk has disappeared completely, ever since the Joseon Dynasty (1392-1910) implemented their anti-Buddhism policy, during the time Confucianism was promoted. The only tradition that has survived is having red bean porridge on the winter solstice after offering it to the Buddha. Nonetheless, Nabpatjeol