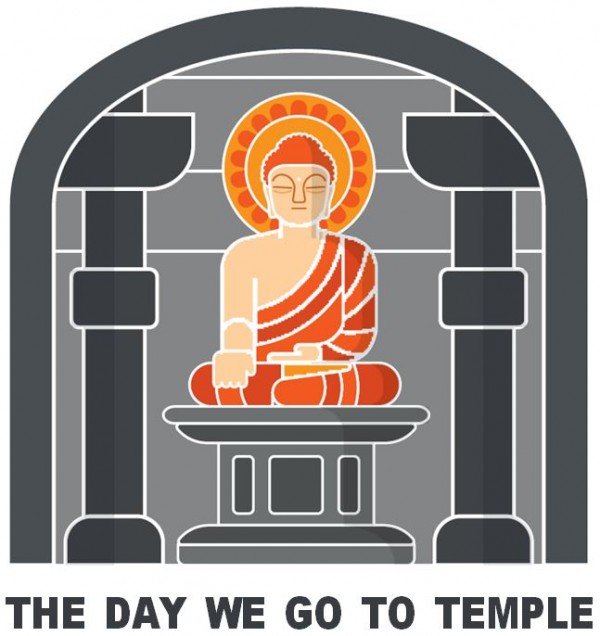 Chilseok, on the 7th day of the seventh month, is noted for its double “Lucky Seven.” The number seven is known as lucky not just in the west, but also in the east. As ancient people believed that the beings of the sky could control the fates of humans, they began to develop faith toward Bukdu Chilseong, the seven stars of the north; that is, the Big Dipper, because they could be seen in the sky all year round. As a result, they came to symbolize heaven in general. Additionally, in the west, it was believed that there were seven heavenly bodies in the sky: the Sun, Moon, Mercury, Venus, Mars, Jupiter and Saturn. Thus, they became the seven days of a week. As Yang, Yin, and the five elements represent the origins of all things in the universe, their names came to be used respectively as Sunday, Monday, Tuesday, Wednesday, Thursday, Friday and Saturday. In the east, whenever double odd numbers appeared, i.e. the 1st day of the first month, the 3rd day of the third month, the 5th day of the fifth month, the 7th day of the seventh month, and the 9th day of the ninth month, the positive energy of yang was at its fullest. So, those days have been considered very lucky, so much so that they were designated as holidays. Among these lucky days, the 7th day of the seventh month was considered worthy enough to represent Bukdu Chilseong,

The belief in Bukdu Chilseong, or the Big Dipper, has its roots in Taoism, which believes that the stars control the fortune and life of humans. As a result, the system of worshiping of the seven gods, or Cheilseong of Taoism, developed. Thus, they came to be important objects of prayers for longevity and good fortune. In Chinese mythology, there is a story of a boy born with a short life expectancy, but he was able to extend his life by appealing to Bukdu Chilseong. He went to visit a place where the North Star and the South Star played a game of Baduk, or Go, and his wish was granted.

As the belief in the holiness of the number ‘seven’ began with the belief in the constellation and celestial bodies, the day of ‘double sevens’ also originates with the love story between the two stars of Altair and Vega. Actually, these two stars, separated by the Milky Way, appear to be quite close on Chilseok. Thus, the creative story was told of two lovers – Gyeonwu (Altair) and Jiknyeo (Vega). The pair could only meet once a year, as punishment for incurring the wrath of Jiknyeo (Vega)’s father, the Jade Emperor.

One interesting fact is that the depiction of Gyeonwu and Jiknyeo, along with the Milky Way in the middle, was already carved on the ceiling of an ancient tomb by the time of the Goguryeo Dynasty (37 B.C.–668 C.E.) in 408 C.E. In the mural of Deokheung-ri Tomb, one scene appears to depict the farewell of Gyeonwu and Jiknyeo on the evening of Chilseok. The portrayal of Jiknyeo, looking sorrowfully towards the back of her love, Gyeonwu, herding cows, is terribly heart-breaking. In the history of Goryeo Dynasty, records state that the 33rd King of Gongmin (1330-1974) along with his wife, Princess Noguk, held a ceremony for Gyeonwu and Jiknyeo on the day of Chilseok, which implies that Chilseok was celebrated both by the royal court and the common people.

The tale of Gyeonwu and Jiknyeo originated from the early history of China. As time passed by, the story became more elaborate and expanded, and the customs of Chilseok have also become more abundant. When it rained on the day of Chilseok, the people regarded the raindrops as the lovers’ tears, and the legend of a bridge made of magpies developed. At first, the bridge came to emerge as a giant magpie called Joryeungjak, but later this become hundreds and thousands of magpies creating the famous bridge of Ojakgyo, for the lovers to cross once a year. The humorous and surprising detail was added, that as they walked on the magpies’ heads, the birds became bald.

Because of this, another custom emerged, with commoners giving food to magpies on the day of Chilseok. This was the reward given to magpies for their sacrifice, going bald while making a bridge to help the couple meet. The custom of giving food to magpies was not exclusive; rather, it was expanded to giving food to all hungry birds. This has continued as the tradition of leaving a few fruits on the trees at the end of a harvest. The story of Gyeonwu and Jiknyeo was also portrayed as the meeting of a cowherder and a weaver; thus, the custom of Geolgyo of Chilseok also became popular. This was the wish to increase one’s skills in weaving and needlework, as women presented the offering of a table set with their handmade cloth and fruits.

The worshipping of the seven gods on Chilseok Day was a tradition kept by commoners. Though Bukdu Chilseong or the Big Dipper, and Gyeonwu, or Altair and Jiknyeo, or Vega, the main characters of Chilseok are different, they are brought together by becoming the object of ceremonies on the 7th day of the seventh month. As the offering was performed for the stars of Gyeonwu and Jiknyeo during the Chilseok Ceremony, it was only proper to pay tribute to Bukdu Chilseong, the head of all stars, as well as to set the 7thday of the seventh month as the date to worship the seven gods. Though the origin of Chilseok started out with Gyeonwu and Jiknyeo, it makes perfect sense that the ceremony of Chilseok was also considered a ritual of Chilseong.

Accordingly, ‘the meeting of Gyeonwu and Jiknyeo on Chilseok’ and ‘the wish for Gija, or a boy, and Subok, or longevity, on Chilseong’ were naturally combined, so that the day also symbolizes the wish for a good union between a man and a woman. Additionally, the seven gods have become the granters of these wishes in their divine existence. Though the customs of Chilseok among commoners have disappeared, the Chilseok offering on Chilseok Day has continued. It has now expanded to become the Chilseok Dharma Ceremony, where singles are encouraged to come seeking suitable mates. This tradition is practiced instead of Valentine’s Day, a custom of unknown origins. Buddhism has taken the leading role not only in the preservation of traditional culture, but also in the practice of reinterpreting its traditions to reflect modern themes.

On the day of Chilseok, Buddhists visit temples to present their offerings. Chilseong; that is, Chilwonseonggun, the Seven Sages of Tathagata, are best known for granting wishes for longevity. They are enshrined in an altar of a dharma hall, or Chilseong-jak, the Seven Star Shrine. Along with the mountain god, Chilseong are members of the 104 divine guardians of Dharma, but as they are important objects of worship among the people, they are enshrined separately.

Chilseong-jak, the Seven Star Shrine, is unique to Korean temples. The building of these shrines began in the middle of the Joseon Dynasty (1392-1897), and they have now taken up residence in most temples. However, the shrine was not established simply to enshrine the Taoist Bukdu Chilseong, or Big Dipper, but also the Seven Sages of Tathagata, who adapted Buddhism, as well as the seven gods of Taoism. In other words, the wishes of the people were combined with the seven gods, which resulted in the creation of the Seven Sages of Tathagata. Thus, we can see that each of the seven stars of Bukdu Chilseong was given the role of teacher as Tathagata.

In Buddhism, Chiseonggwang Tathagata signifies the North Star being enshrined and Ilgwangbosal, the bodhisattva of the Sunlight, as well as Weolgwangbosal, the bodhisattva of the Moonlight, are kept as his attendants on the right and left. The seven sages, regarded as the seven Tathagata, are each given a role in their respective world. Likewise, placing the North Star at the highest point, Taoism has referred to him as Jamidaeje, the leader of all stars, and Buddhism has adopted him as Chiseonggwang Tathagata. The seven gods of Chilseongwongun or Chilseong Tathagata have been given the role of judging the fortunes of humans, and the North Star symbolically watches over us all.

The North Star is called King Jonseong, and is the king of the stars. This is where the king of the heavenly bodies resides. In India, the North Star has become a demigod called Myogyeon bodhisattva or Myoken-bosatsu. He is seen as the leading figure of the Big Dipper. As it is the brightest, it is called Chiseonggwang, which probably means that wherever sentient beings seek help, he will light up the sky with his bright eyes and his radiance will beam in all directions.

Meanwhile, Venerable Ilhang of China’s Tang Dynasty (618-907) was concerned about possible conflicts between Buddhism and Taoism because of the Chilseong belief. For this reason, he decided to adapt it based on the belief of the Medicine Buddha. Consequently, the seven Buddhas have been renamed according the Medicine Buddha doctrine, following The Seven Medicine Buddha Sutra.

In Byeolhoesimgok, the seven gods assumed the following roles:

By whose virtue have you come to this world?

By the deeds of Sakyamuni Buddha,

Pray before your father’ bones.

Pray for flesh before your mother.

Pray for good fortune before the King of Devas.

At last, you are born.

People believed that one was born with the goodness of Sakyamuni Buddha’s good deeds through their parents’ bodies, acquiring their lifespan from the seven gods while asking for good fortune from the King of Devas. The seven gods, who were in charge of birth and fate, were regarded with the same reverence given to Sakyamuni Buddha and the King of Devas. This is how we can infer that the Chilseok belief was rooted deeply in the people’s hearts.

* Please note that this writing is an excerpt from the book, "The Day We Go to Temple" and is contained in the autumn 2016 edition of the Lotus Lantern magazine under Buddhist Culture Section on page 23~29.