* This article originally appeared at www.killingthebuddha.com. 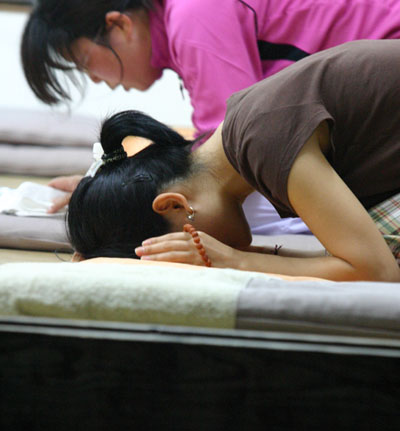 Past New Year’s resolutions since adult consciousness: floss, stop gossiping, eat a salad a day, floss (I needed to recommit). This year’s resolution: 108 bows a day for 90 days.

If you’ve never tried bowing -- with your knees, elbows, and head on the floor, palms lifting the Buddha above your ears -- you might be surprised to learn that even three can be a serious workout. Which makes my vow to bow -- adding up to a total of 9,720 bows -- a serious resolution. Slacking on or abandoning the vow will result in bad karma. So, in the past two weeks I’ve been preparing for my three-month journey of homage to one of the triple gems -- the Buddha -- by every dawn doing 20, 30, 50, and tomorrow, the high of 80.

I’ve done my research. I asked a monk to show me the proper way. I performed my sloppy bow for his correction. No, he told me, don’t push up with your arms to stand up. Rather, you should lift your whole body with your legs. Pushing up with your arms results in lower back pain and upper arm soreness.

As I discovered for myself, it’s hard on the wrists, too. Professional-grade bowing is like doing deep-knee bends, except a bow is even deeper. I tried a few in his presence, to the popping of various leg and ankle joints. Then I blushed, recalling the grandmothers in their late 80s and 90s I’d seen in Korea, who would sprint up mountainsides past me and begin hundreds of prostrations with utter single-mindedness. What a shame that in my mid-20s I was huffing and puffing after ten.

So why would I take on such a painful project? It’s inspired by a Korean friend of mine. He recently did 3,000 bows in one night, without a snack or a bathroom break. I’ve often scoffed at people who did repetitious things that had no use. I was never enthusiastic for chanting something a gazillion times, or bowing, or doing offerings. This summer, I lived in a temple in Seoul where the whole deal was chanting and bowing -- at least a 100 housewives would show up for the three a.m. session. What, a temple with no meditation practice?!

But my 3,000-bows friend knows bowing differently. He says bowing purifies his mind from discursive thinking, as does meditation, yet the constant motion keeps him from falling asleep or losing concentration. He bows to the Buddha nature inherent in all beings, hoping his bows will cultivate the awakening to that Buddha nature. And finally, as a piece of psychology, the bowing helps him to overcome his attitudes of resignation, of weakness.

There is something remarkably purifying about 3,000 bows, I will admit. There’s a well-known monk in Korea who will only answer questions after the inquirer has done 3,000 bows. Even Catholic priests and other Christians are required to do it. Not surprisingly, he gets few questions. Yet often that’s not because people give up, but because they find the answer to their question while bowing.

Knowing that a majority of Buddhists around the world are bowers-n-chanters, not the still, cross-legged, meditative variety that I know more thoroughly, I’ve decided to give bowing a shot. Though I haven’t started my trek yet, I can tell you what’s been happening in my two weeks of practice for the real thing.

With American-like athleticism, I prepare for the 20 minutes of bowing by putting on an extra dose of deodorant, a tee shirt, and some Korean baggy pants made especially for temple time. Baggy pants are a must, as restriction around the waist, crotch, butt, or knees makes things most unpleasant. I handkerchief my hair so that it doesn’t fling into my eyes, remove my glasses so they don’t jostle around, turn off NPR, light candles and incense, and take a few swigs of coffee for stamina. I put one pillow down for my knees (even the monk recommended this) and another for my forehead so that rug-dust doesn’t cling to my sweaty forehead.

I’m sure the temple grandmothers would be laughing like hyenas if they saw me making such a fuss about the simple act of bowing. Or the nuns I bowed with in the deep mountains of Korea, struggling with their heavy layers of flowing robes, while I consider a sports bra. Oh, did I mention that they chant the whole way through, too? I can’t even control my breath enough to say the Buddha’s name.

And yet, after just two weeks, I’m finding that, if I don’t start my day with bowing, the whole rest of the day seems out of kilter. It’s as if the bowing puts everything into alignment. I can’t explain it, yet. I’m also discovering that bowing is meditation, at least in the mindfulness form of meditation, and certainly a cousin of walking meditation. If I put my mind fully into the bow, I can notice all the sensations of the act, just as one does in seated meditation. Yet in bowing, there are about a thousand times more sensations to notice: the movement of muscles, the head rush after coming up from the bow, the shifting of breath, keeping count of what bow I’m on, remembering to softly say the Buddha’s name, and so on. I also notice where my mind wanders off to. Here are a few vistas my active mind enjoyed:

On bow 32 -- or is it 33? but then it could be 43? -- I considered buying a motion counter, so that I could do precisely 108 bows without having to count under my breath. My theory was that if I didn’t have to count, I could more fully throw my energies into reverencing the Buddha-nature. This is poppycock, of course, but it was interesting to watch my mind play these games. I’ve also thought, while going down for bow 57, about how I could pray for certain people or projects. Then, maybe I should add a page to my website whereby people can sign up for my doing 108 bows for them. I began planning the web page. I should further give myself a gold star on a chart for every day that I complete them, just to motivate myself. Of course, I’ve also considered the several articles that I’ll write reflecting on this experience, helping Americans to grasp that there’s value in this bowing stuff. Ah…and on and on my mind goes, just as busy planning as it is during meditation.

One of my dharma teachers said that the point of breathing meditation is the return of the attention. Emphasis on return. I’m getting what she said. It seems like every bow offers the chance to start again, as I rise up to the top, pause, and begin bending my knees for another head to the floor. One-hundred-eight beginning-agains. I’m beginning to see the value of repetition: With a baseline, one can measure one’s fluctuations and therefore adapt to one’s own peculiarities. The act of bowing is the same every morning, but on some mornings my body feels light and warm. Other mornings, dull and heavy. Some mornings my mind is foggy, other mornings clear. But I wouldn’t be able to gauge these states, and compensate for them, if not for the consistency of up and down, up and down.

Bowing is becoming my morning coffee. I need the incense, the sweat, the thigh pain, the reverence, to wake me up. This might be my best New Year’s resolution yet. If only I could get so much out of flossing.