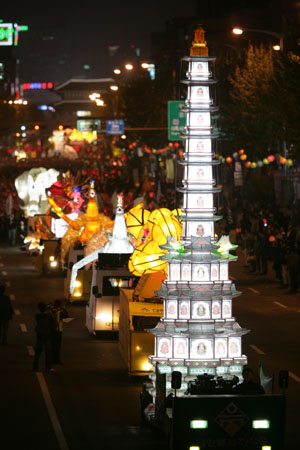 Origin of Lotus Lanterns
During the era of the historical Buddha Sakyamuni, it was a common practice to make offerings to him by bringing food, scattering flowers, burning incense and lighting lanterns. From this custom evolved the famous story of an impoverished woman named Nanda that appears in the Sutra for the Wise and the Foolish (Xianyu Jing).
At the time of the Buddha, a poor woman named Nanda wished to make a lantern offering in honor of the highest and noblest person in the world. Thus all day she begged for money and took the two coins she earned to a street corner where the Buddha was to pass. There she lit a lantern and prayed with her whole heart;

"Lord Buddha, I am so poor that I am not able to make any offering. Although this is not very much, I have lit a lantern and if this may bring even a little merit upon myself, I will be able to attain Budhahood in a future life."

As the night grew deeper and a strong wind started blowing, the embellished lanterns of the king and the aristocrats died out while only Nanda’s lantern shone brightly. Buddha’s assistant and one of the 10 disciples, Ananda, attempted to extinguish the lantern with the end of his robe but met with no success. The Buddha a spoke to Ananda thus:

" Ananda, do not waste your energy. The lantern was lit by a poor woman with great devotion and sincerity and therefore it will not die out. Due to her pious act lighting the lantern, this lady will most surely attain enlightenment after 30 cons(i.e. a very long time). Her name at that time will be "sumidungwang Yorae"(the Lantern Light Tathagata of Mt. Meru).

A lantern offering, then, is the lighting a lantern before the Buddha and praising his benevolence with a bright, clear and untainted heart, and pledging to take refuge in his great mercy and compassion on the road to one’s own enlightenment.

The features of early lotus lantern festivals in India were recorded in detail by Ven. Faxian of China’s Eastern Jin Dynasty, who traveled in 399 to India to bring back the entire corpus of Vinaya [Rules of Monastic Discipline] texts, and then translated them into Chinese.  On the Festival of Buddha’s Birthday pilgrims traveled to the major temples in the big towns in wagons strung with lanterns and containing magnificently decorated Buddhist statues.  This is not simple religious consciousness, but appears to be the early development of a kind of national festival.  Crossing over to China, making and lighting lotus lanterns became a beginning-of-the-year custom integrated into the culture.  During the Tang Dynasty, the peak of Buddhist culture in China, it is said that three-day festivals with all sorts of amusements were held, with performances of usually-prohibited singing and dancing permitted by the government.
History of Korean Lotus Lanterns
Records say that "sight-granting lanterns" were never extinguished when the Korean Silla Kingdom’s 24th King Jinheung (r. 540-576) held the Yeondeunghoe [Festival / Ceremony of Lotus Lanterns] together with the Palgwanhoe [Assembly of the Eight Vows, an important Buddhist public gathering].  In the Unified Silla Dynasty, it is reported that in the late 800s many people of the capital (Gyeongju) went to Hwangnyongsa [Yellow-Dragon Temple] on the First Full Moon of the year to light lotus lanterns.
From the beginning of Korea’s Goryeo Dynasty (918-1390), the Yeondeunghoe and Palgwanhoe were divided into two great festivals, because Buddhism had become the official national religion.  Gigantic Buddhist paintings were displayed outdoors during those festivals. We also have records that on the First or Second Full Moons of the year (by the lunar calendar, so occurring in modern February or March), the king and all of the people proclaimed their wish for a year of agricultural abundance by parading from the palace out to the countryside, each carrying a splendidly illuminated lotus lantern, and then held a pleasurable public feast and with singing and dancing.  When Goryeo’s 23rd King Gojong acceded to the throne from the military dictator Choi Chung-heon, he started the custom of holding a Lotus Lantern Festival on Sakyamuni’s traditional birthday, the Eighth Day of the Fourth Moon (usually falling in early May). That custom was handed down until today, becoming a standard part of Korean culture.
According to the official Goryeo Dynasty history which was written after it ended, in 1449-1451, it was King Gongmin who started the custom of displaying banners along with Yeondeunghoe on the Eighth Day of the Fourth Moon, and this holiday continued throughout the Joseon Dynasty (1390-1910).
Neo-Confucianism became the dominant ideology during the Joseon period, and so the national government stopped sponsoring these events, but they remained as charming folk-customs, as with the New Year’s practices.  According to some historical records, before the Eighth Day of the Fourth Moon children would cut strips of paper for making lanterns, hanging them from poles as banners, and then parade around the capital city, gathering donations of rice and money from believers and then using the capital to make the lanterns for Buddha’s Birthday.
On that holiday many common people went to the temples, making various offerings, and on that night each household would light as many lanterns as the number of their sons and daughters on illuminated displays built at each house.  At night the men and women of the city parading around carrying the lanterns made a grand sight.  At that time the residents of Seoul climbed Namsan [South Mountain, a.k.a. Myeonmok-san] to see the view of the lanterns streaming through the capital’s streets; this became so famous that old men deep in the countryside would say that one of their lifelong wishes was to see the lanterns from the top of Namsan.  Joseon’s King Sejong (r. 1397-1450) was said to regard the Jongno District’s Lotus Lantern parade as one of the “ten representative scenes” of Seoul.
In the early 20th century Korea suffered suppression of its culture during the Japanese imperial occupation, but despite this the national folk-customs of ceremonial bathing of the baby-Buddha and the parading of lotus lanterns managed to continue. In downtown Seoul, in the open space in front of the Bank of Joseon and in Jangchundan Park, (now known as Tapgol Park), people still practiced pouring water over small standing statues of the newly-born Buddha, and decorating them with flowers.  At night offerings were dedicated and lotus lanterns were paraded around the Jongno-Euljiro-Gwanghwamun Districts (downtown) with floats of other Buddhist symbols such as white elephants, pagodas and so on.
After the deeply emotional liberation in 1945, the custom of lotus lantern parades continued from the Buddhist Dongguk University along Euljiro Avenue to Jogyesa (the headquarters temple of Korea’s Jogye Order) in Anguk-dong (northern downtown, near the palaces). In 1975 the Eighth Day of the Fourth Moon was designated as a National Holiday, and on that evening in the following year citizens held a miles-long procession from the vast Yeoeuido Plaza throughout the city up to Jogyesa.  This was a surprising show-of-force for Korea’s once-oppressed Buddhist community.
The present-day custom of Seoul’s Lotus Lantern Parade Festival started today in 1996, and has become a famous cultural attraction. The gigantic and colorful parade, with many large illuminated floats, is now held on a weekend evening before the actual Buddha’s Birthday holiday, so as not to conflict with each temple’s religious services. It is organized at dusk in Dongdaemun Stadium and proceeds down Jongno Avenue; the final segment where it reaches Jogye-sa has been greatly reduced, due to traffic-congestion problems. However, many colorful public cultural events are held on the street in front of Jogye-sa, now called the “Buddhist Street Festival” as a part of the Lotus Lantern Festival which combines the formal religious Lotus Lantern Dharma Assembly with the “Daedong Celebration of Unity and Hope.”   As this has been held year by year, participation in it by foreign residents and visitors of Korea has continuously increased, and its international reputation continues to build.