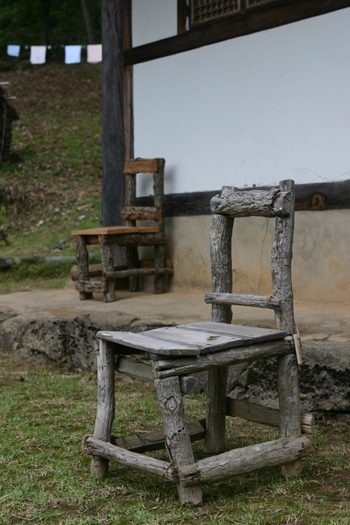 Some days ago, listening to the "ttok, ttok, ttok" sound from outside my window, I found myself as if lost in a trance. On the way out to water the tree I had been tending, I finally became aware of what had been making that noise. I saw a titmouse flying out from an opening of the stove chimney. It appeared that the titmouse was building a nest in there.

The titmouse, unlike other birds, doesn’t really hide its nest very much. If a place is tolerable, the titmouse will build a nest anywhere. In a box left in the backyard or in a place like the corner of a house under the eaves, if the frame is suitable for a nest, the bird will prepare a home there, lay an egg and have a chick.

If it were like other birds, it probably wouldn’t build a nest in a place like the chimney of an iron stove. I don’t know how it could even find this place big enough to get in and out of, but sure enough, inside the bird had built a nest. Looking at this simple life of this titmouse who is so unconcerned about its house, many thoughts came to my mind about the place that I lived.

To the bhikku, there is nothing that could be called their original home. Even though they may have constructed a temple or hermitage by the strength of their own hands, in all respects it is common property and can never be an individually owned possession. Because of this, many temples have lasted almost one thousand years, and to this day, they are considered all of ours. Quite simply, it is considered that according to your karma you stay at the temple, and according to your karma, you leave. It is probably because we know that sometime we will cast off and leave our body that we allow ourselves to be bound to that which is constructed by the combination of wood, earth, stone and metal.

In this land of mountains upon mountains, unawares, I’ve now lived for some 40 years. As soon as I thought about this, I suddenly smacked my forehead thinking about that word, "unawares." Time passes, a day goes by, a month goes by, it turns into years and then 40 years have totally passed by. For 40 years, the places I have lived at and relied on here and there, listening to this dawn’s cry of the cuckoo . . . I ponder them.

The temple I found on my way to becoming a full monk was Mirae-sa in Tong-yeong (South Kyeongsang Province). As I continuously knocked my head against the low threshold of the house there, it was a period where I was so hungry that even the bits of noodle left at the well were delicious. This was a time when, in the room for the aspirants, though I slept with my head resting on the hard wood pillow, because I was always tired sleep was like the taste of honey. Though the meditation room was cozy then, now everything has been greatly enlarged and the mood of the temple is completely different than before.

After becoming fully ordained, the temple where I served a master for the first time was at the Tapjeon at Ssangye-sa in Jiri Mountain. This was a meditation hall with a view overlooking the far-off Baek-un Mountains, crossed by the Seomjin River. This was the kind of place where when the time for meditation came, even if the room was empty, the sound of the jukbi would come forth on its own accord. It was here that I passed my steady, so very steady, time as a green monk. Looking back now, this was such a clear, pure, and pristine time.

In the depth of winter, even though I ate only plain rice with soy sauce, every day was abundant with the heat and passion of my meditation. If I compare today to that time, I’d give that time a grade of A and today would be no better than a D or F. Even that grade would be generous. In the Hwaeom sutra, the words "with the ever fresh mind, awakening is created" stand as a model lesson to all aspirants.

There is the old saying that the voyage of one thousand li depends only on the very first step; this is a teaching that bears our rumination. According to how we take that first step, our goal point can completely change. I wonder how much my present is so thoroughly connected to that clear and cozy temple.

The next place I came to depend on for my living was Haeinsa in Hapcheon. There was the Toeseoldang meditation hall, located outside the walls of the hall where the 80,000 woodblocks of the Tripitaka Koreana are enshrined. Even though this is a place where because you have to live in concert with many other monks, you have the opportunity to learn a lot as you see, hear and feel many things, there is also that regret that comes with having to waste so much time on useless busy work. Nevertheless, for twelve years, living on Gaya Mountain at Haeinsa, one might say that this was the period where I earned my chops as a monk.

To this day, I still have good memories of the mind that prayed morning and night, in the main hall as the sangha gathered to pray, each separately coming forth to do our prostrations. When I speak of "prayer," this isn’t the act of wanting some wish fulfilled, rather this was a period when I refined my role as a spiritual seeker, aiming for a complete opening of my mind.

At Haeinsa, my life as monk completely changed, due to the fruition of my karma that brought me to meet Unheo Seunim. Up to that point, though I had been like a "rainwater monk" with my single pack wandering from this mountain to that, from this point onward I began to understand my opportunity. A better way to say this might be that even though I would say that I was becoming more accustomed to the sociality of the spiritual seeker’s life, like the eulalia weed, there was a watershed of powerful ideas gradually coming to fruition.