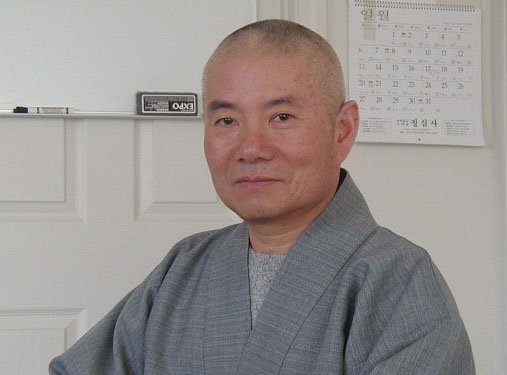 The Buddha had practiced operative karmas throughout many kalpas, and accumulated merits and virtuous qualities. Therefore, he became Homyung (Setaketu) bodhisattva in the Tusita Heaven.
To save all sentient beings, the Buddha-to-be came down from Tusita Heaven to this world of suffering and cyclical birth and death.
The Queen Maha Maya had an auspicious dream in which the Buddha-to-be rode on a white elephant. On April 8th by the lunar calendar in the year 623 B.C., the baby Buddha was born in the Lumbini Park where Udambara flowers blossomed to the full bloom.
When he pointed to the heaven and the earth, and began walking seven steps immediately after his birth, in each footprint, lotus grew and bloomed. The scent of lotus flowers filled the space realm. His big roar of lion, “I am the only noble one in this world,” vibrated the 3,000 worlds and awakened all sentient beings.
The Buddha came down to the realms of sentient beings and renounced the glorious life of royal palace to understand the suffering of humanity. After six years of hard studies and practices of strict asceticism, he was able to attain great enlightenment.
He pierced through the six realms and four kinds of birth as well as through mountains, rivers and earth. He opened the door to nirvana for the ordinary sentient beings to attain the absolute universe-self until the realms of space and sentient beings come to an end. With the Middle Way as the nature of reality separated from the right and wrong, and the good and evil, all dharmas are united and harmonized. The material and immaterial neither increase nor decrease, and are equal without discrimination. There are no places not revealed and shone by innumerable transformation bodies. Queer and inconceivable Great Love and Great Compassion are vast and boundless.

When everyone offers a prayer to the Buddha and lightens one’s own mind lantern on the Buddha’s birthday, countless past karmic obstructions will be brightened as wisdom. Therefore, the old Buddha’s smile becomes the flower of world, and it would not be difficult for the incurable worldly affairs to become stable.