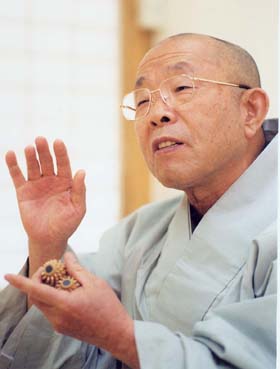 Master Baoyun (Boun in Korean pronunciation), who lived at the Mountain Luzu in Chizhou district, Anhui province, immediately turned around and sat facing the wall, whenever a monk visited him. Then the monk had to leave. Master Nanquan Puyuan heard about this and said:
"I always told monks, ’You should hear the words of masters from the state prior to the Buddha’s entry into the world.’ However, this monk having heard such words may not as yet have fathomed even half of their meaning, to say nothing of the whole meaning. Such being the case, he will attain it, whether the whole meaning or half, when it becomes Donkey-year (=without date, because the donkey does not appear in the Chinese zodiac signs)."
Master Luzu Baoyun’s instruction to visiting monks of sitting in meditation facing the wall, had not previously been carried out since Bodhidharma had sat facing the wall for nine years. Now Master Luzu wanted to incite practitioners, who came from various places of the country with their various questions about the Buddha and the patriarchs, to feel the pain and the itchiness themselves, and so he employed this means purposely. Nanquan and Luzu were dharma brothers, as both were disciples of Master Mazu. After having seen that Luzu, being pricked with needle and awl, didn’t move at all, Nanquan made a remark. Seemingly he criticized Luzu for his arrogant attitude, though, he actually praised him and surrendered all of his attainments to him. In fact, no matter how well Truth is explained, how can it be compared to ’going and seeing’ it for yourself? Therefore, [the teaching of the Buddha at] Vulture Peak was like drawing the moon and [the practice of the Sixth Patriarch at] Mountain Caoqui (Jogye in Korean) was like pointing at the moon. In the wall facing sitting meditation of both Bodhidharma and Luzu, wall facing sitting meditation was itself a dharma-talk. Was there any need of expressing in words?
Whenever monks came to see Master Luzu, he turned around and sat facing the wall. When Nanquan visited him, again he turned to the wall. Most monks left without saying anything, but Nanquan dropped a word about it. Master Nanquan was a man of insight, generally perceiving proper timing and foreseeing good and bad luck, though, we can say, this time he didn’t understand Master Luzu’s real intention.
Certainly, if you want to sell gold, you should meet a man who wants to buy gold. Nevertheless, when monks visited, Master Luzu always turned around and sat facing the wall. Why? Was the sitting Seon? Was facing the wall the Path? Was the act of turning around of benefit to others or not? Were the monks treated properly or not?
Regarding this, Master Xuansha Shibei (Hyeonsa Sabi in Korean) made following comment:
"If I had seen Master Nanquan at that moment, I would have given him five burn moxa (= medical treatment of burning the skin with moxa) on his back."
That being the case, were these words the same teaching as the wall facing meditation of Master Luzu, or different? If, among those of you facing the conclusion of the summer retreat, there is a monk who properly realizes its meaning, I will approve him by saying, "There is a place for your dharma." Monks, you are going to complete the summer retreat of the year of Byeongsul, 2006. If by then you have not yet realized this meaning, you should never try to speculate upon it, being confused in the cave of a ghost, but keep it in your monk bag on your wandering way experiencing all doings and concentrate on it.

Luzu’s facing the wall is an incommunicable message
Taking a step forward, one will meet thorn bushes all along the way.