The preparation and taking of temple food is different from that of ordinary food. The cooking process is like that of making medicine: extracting the poisonous elements from wild plants, and then enriching the plants to a high value of nutrition. The way and manner of eating is equally an important part of the process as is the behavior when eating: all demonstrate the medicinal aspect of temple food.

From early times, cooking temple food has been thought of as a practice. From the beginning, from the cooking up to the eating, the whole process is taught as a kind of training of the mind. Thus, temple food is called ‘meditation food,’ for it makes the mind and spirit clear. As far as nutrition is concerned, temple food functions as well as ordinary food and other vegetarian food, but in addition, it helps the body and the mind to be healthy and clear. Temple food is often called ‘Stabilizing Food’, for it strengthens and balances the inner parts of the spiritual mind. You can easily understand this when you look at the fact that unstablizing food such as meat, fish, the five prohibited vegetables and especially fast food affect us in such a way as to make us irritable and angry. In short, temple food is specially designed to make the life of the practitioner easier for training and practicing in Buddhist temples. That is why it is called ‘Practice Food (수행식)’ as eating is not done for the pleasure of the taste, but as one way of practice for attaining Wisdom.

Since the very beginning, traditional Korean Buddhist temples have kept and developed their own unique systems using their own recipes. Sometimes, certain dishes bear the same name but due to differences in the way of preparation, they will have different recipes and so a different taste. In consequence, temple food has developed differently in different temples as each place has its own traditions. There are various types of temple food such as porridge, steamed rice, soup, kimchi (pickled cabbage), seasoned wild vegetables, fried vegetables, stewed vegetables, baked vegetables, pickles, and rice cakes, etc. 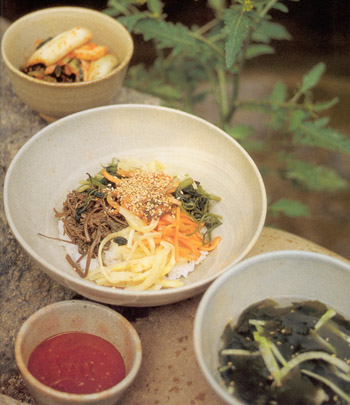 <RECIPE METHOD>
1. Clean the bell flower roots by rubbing them well in salty water. Shred, and saute in sesame oil. Season to taste with salt.
2. Cut the bracken into 2-inch lengths and saute in sesame oil. Season.
3. Shred the carrot into 2-inch juliennes. Saute in vegetable oil and season.
4. Scald the garland chrysanthemums and rinse in cold water. Squeeze out water and season with sesame oil and salt.
5. Serve the vegetables over cooked, hot rice, accompanied by red pepper paste and cold brown seaweed soup.