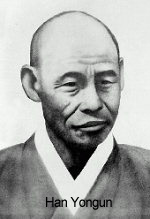 At number 222 of Seongbuk District in Kyeongseong Prefecture, there is a straw-thatched house, in which Master Han Yongun abides while engaging in meditative practices. His house is called ’Simu-jang’, meaning ’house of searching for the ox’, and his pen name is ’Mokbu’, meaning ’cowherd’. Therefore, this is my question to him: "Venerable Master Mokbu of Simu-jang, when did you lose your ox? Your name  Mokbu reveals that you have attained an ox and fed it, though, now that your house is called Simu-jang, it is also clear that you lost your ox. If you never lost your ox, why do you refer to searching for the ox, and if you lost your ox, how can you feed the ox?
Venerable Master Mokbu of Simu-jang, encountering this moment, are you seeking an ox or feeding an ox? Or do you forget both, whether seeking an ox or feeding an ox?
Venerable Master Mokbu of Simu-jang, Mountain Samgak is at such a height and density that its high ridges are high and low ridges are low, while the wind is bleak and the water is cold. Do you know that? Please send me an answer in a phrase."
2) An Answer to Master Kyeongbong by Master Han Yongun
No hair and no horns being found,
how can there be gain or loss?
Already having too much work,
the cowherd unnecessarily built the Simu-jang.
3) One More Letter from Master Kyeongbong to Master Han Youngun
The cowherd complained of too much work.
Then please, take a cup of tea.
Duo!3) 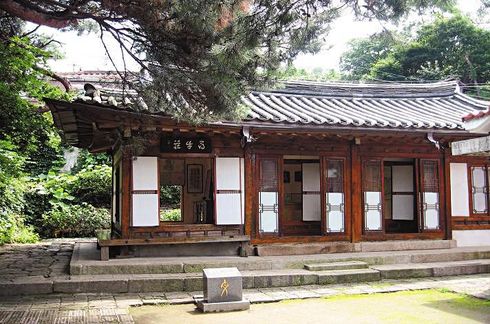 <Han Yongun; house, ’Simu-jang’>
1) Master Gyeongbong (경봉 鏡峰 1892-1982); a renowned monk of the Colonial Period and Contemporary Korea. His Buddhist name was Jeongseok and his family name was Kim. He was born in Milyang, learned Confucian texts in his early years and at the age of 15, he lost his mother. At the age of 16, he entered the Buddhist Order under the guidance of Master Seonghae of the Tongdo Monastery. When he read the scriptural phrase, ’counting the treasure of others all day long, though, one has nothing of his own, not even a half pound’, he made a resolve to attain enlightenment. Devoting himself to the Hwadu meditation in his room, at midnight, when he saw the candlelight fluttering, he attained enlightenment. He was 36 years old. At the age of 61, he was selected as the Head Master of Geuknak Seon Center at Tongdosa Temple. He died at the age of 91, 76 years after entering the Order.

2) Master Han Yongun (한용운 韓龍雲 1879-1944); a renowned monk, poet and fighter of national independence during the late Joseon Dynasty and Colonial Period. His pen name was Manhae 만해 卍海, his Buddhist name was Yongun, and the name given him when he received precepts was Bongwan. He was born in Hongseong, Chungcheong Province. Under his guidance, Master Kyeongbong, the writer of this letter, studied Avataṃsaka Sūtra 『華嚴經』at Tongdosa Buddhist School. At that time, he also engaged in editing the Great Dictionary of Buddhism, while giving lectures to the student monks and warning of impending imperialism through an example of the fall of Vietnam. He devoted his whole life to the independence movement, engaged in the formation of the Declaration of Independence on the first of March 1919 as one of the 33 representatives of Korean people, representing the Buddhists. Thereafter, he was arrested and sentenced to three years imprisonment. His fight for independence continued, but he also wrote many essays and poems. In 1944, at the age of 66, he died at Simu-jang.

3) Jeok 聻;; referring to a departed soul which died again as a spirit, and so it is even frightened by other departed souls; Or referring a sound which can make all appearances (= defilements) disappear. Cited from Commentaries of Five Masters on the Diamond Sutra 金剛般若波羅蜜經五家解 by Master Deokmin, http://www.bulguksa.or.kr/user/korean/dukmin/0603.htm.