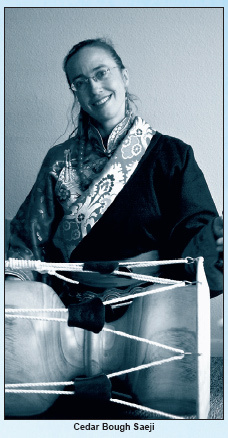 This is the second part in a series looking into religion in Korea. The first objective is to give expatriates a springboard from which you can develop spiritually. Feature articles will examine Christianity, Buddhism, Islam, Hinduism, Judaism and Sikhism. - Ed.

At times being a foreigner in Korea can be a little challenging. There is both an immense language barrier and a cultural barrier. But once you get past the culture shock, both can be overcome. Cedar Bough Saeji is a good example of a foreigner who has successfully managed to immerse herself in both the language and culture of Korea.

One of the ways she did that was through the practice of Buddhism.

"I feel that I became much stronger in my practice after moving to Korea, and specifically I found the Korean Jogye Order’s way of practicing Buddhism to meld nicely with the various things in the tradition that I had picked up on," she said.

If you’re interested in meeting other Buddhists, but you do not speak Korean fluently, Cedar Bough recommends visiting one of the country’s many temples. "There are temples everywhere in Korea; if you go to one, you can expect to meet other Buddhists. You don’t need to speak Korean, you just need to be respectful and observe temple etiquette. If you just do that, they’ll like you already."

She also talks highly of temple stays. If expats are seriously interested in Buddhism, she recommends going on a temple stay program at a remote temple. She says it’s cheap and proper instruction is provided on how to participate in the ceremony and temple etiquette.

"In Seoul there are Dharma talks advertised in the religion section of the newspaper, in English. There are also some temples that are being run by foreign-born abbots, or abbots that speak good English. If you contact the Jogye Order they will put you in touch with everything you need," she said.

The Buddha stands tall at Bongeunsa, Gangnam-gu, in Seoul.

What is it about Buddhism that appeals to her?

"Everything, really. My favorite sutra is perhaps that of Vimalakirti, reading it is out of this world - Thurman’s translation is supposed to be the best. I like impermanence and reincarnation - I like that I can keep improving myself through multiple lifetimes. I’m not a meditator. A lot of Westerners think of Buddhism and they immediately think of sitting meditation. That’s not for me," she said.

"But I love bowing, prostrating, chanting. Right now, working on my Ph.D., I feel very connected to Manjusri. It can be hard to explain but I feel the rightness of Buddhism inside of me as I practice. I took a three month dedicated Buddhist pilgrimage, and I visit a lot of Buddhist sites as part of less Buddhist focused travels - most of the major sites in Asia, actually. It’s also important to me that Buddhism does not negate the truth in other doctrines/religions - it is not dogmatic."

Regarding English accessibility, she said you probably won’t find good Dharma talks in English near your home, "but there may be a nearby temple. I suggest that you read up on Buddhism at home and go to the temple for the uplifting feeling you get when you start the day with 108 bows."

I met Cedar Bough seven years ago. We were both busy with our own things here but ended up in graduate school at international studies programs across the road from each other. I was at Ewha Womans University and she was at Yonsei University. Now she’s in Los Angeles pursuing her doctorate at UCLA.

Cedar Bough first arrived in Korea in 1996. Her reasons for coming to Korea sound similar to others who’ve come: She wasn’t particularly interested in Korea, but had a goal of paying off student loans and a desire to see the world. "I had no special reason to come to Korea. I had no special previous knowledge of Korea or interest in Korea. So, until I showed up, Korea was basically a blank slate for me ... I found that I really loved Korea and I felt like it was my fate to come to Korea and that I had been led to come to Korea for a reason because I felt everything about Korea, even the air, which some people may complain about, even breathing in the air made me feel like I was at home.

"There was a tremendous feeling of comfort in Korea that I felt like I hadn’t experienced in other places. So from the moment I arrived in Korea I really knew it was a good place for me to be. Korea has almost always treated me very well, so I have had all these amazing experiences and a lot of stuff has led me to want to stay there."

She left for a year in 2003 and spent time in China. There she was reunited with her then-fiance, now husband, Tibetan musician Karjam Saeji. After spending a year in China, she came back to Korea and enrolled in Yonsei’s Graduate School of International Studies. There she earned a master’s degree in Korean Studies with a focus on Korean culture, society and religion.

"I realized I really enjoyed academia and that I wanted to perhaps have a future in academia," she said.

However, after Yonsei she took a year off to take a pilgrimage from Eastern Tibet to Lhasa with her husband. Because her Ph. D. focuses on Korean performance arts, when finished, she’ll have a doctorate in culture and performance with a focus on Korean folklore.

"Most particularly, I like the Korean mask dance dramas, but all folk performance arts are interesting to me, even court arts are fascinating. Preservation of traditional culture has to be done in the right way so that it’s not turned into a reenactment, but is still part of Korean consciousness. I become quite distressed when I see how little younger Koreans - and I can’t blame very young Koreans, but college age Korean students - know about Korean traditions. Typical Korean college students may know a little about traditional Korean culture, but maybe they can’t even tie the bow on a hanbok."

Cedar Bough is a great example of how an expat can learn more about Korean culture and the language. Her advice to others who want to learn more is pretty straight forward: "In general, if Koreans see a sincere desire to learn about Korean traditions then the people that know about them are very happy to teach foreigners. When you sometimes get a sense that Koreans don’t want to teach you about something traditional, it is generally when they’ve run into the limit of their own knowledge and they’re embarrassed. Because how embarrassing is it to have a foreigner interested in something about your own culture that you do not know? So people will shut down and give a foreigner a feeling of being closed out."

She then talked about specific places in Seoul where expats could learn about Korean arts and culture. She said one of the best ways for expats to get a taste is at the National Center for Korean Performing Arts. Twice a year they run free, or low fee, classes that give expats a chance to learn gayageum, or janggu. "It’s a good way to get an initial idea if you’d be interested in taking it further. It is free and it is on the weekends. There are actually hagwon for Korean traditional dance and music."

She said city governments run cultural and educational programs. She added that, while there might be a language barrier for a lot of these classes, you can listen, watch, follow along and still learn.

If you’re interested in getting deeper into Buddhism, Cedar Bough said that you should stick with the same temple, so that people get used to your presence. "I think that foreigners should know that if you go and practice respectfully in Korea, in the course of only a few visits to a temple ... people will get used to you and welcome you. It will take longer if you skip around and come to different services at different temples, of course. If you live in Seoul, you should go to the 4 a.m. service at Jogyesa at least once. During my M.A. in Seoul and now every summer when I visit Korea for research I go there as often as I can.

"If your own learning has only taken you so far and you really want to go deeper, there are retreats at several temples, including ones run in English, you can get more information at seoulzen.org about those."