In Buddhist history, there has never been religious war.  What could be the reasons?

Prohibition of killing, non-violence, and tolerance (pluralism) are the traditions of Buddhism.  Accordingly, there has never been religious wars of great scope.

The edict of the great King Ashoka to respect other religions, not kill, etc.

The German Existentialist Karl Jaspers said that among the religions founded by great beings such as Socrates, Shyakamuni, Confucius, and Jesus, “Buddhism is the only religion that didn’t cause war, oppression of heretics, and crusades based on religion.”  We cannot say that Jaspers was wholly correct, but in reality, there has never been a religious war on a large scale for the sake of Buddhist doctrine.

Buddhism can be widely categorized into northern Buddhism (Mahayana:  , , , etc.), southern Buddhism (Hinayana: , , , , etc.), and Tibetan Buddhism (Tantrayana: , , etc.).  Although there are great differences in ideology between these traditions, there have never been any religious wars like those in Christianity.  This is because, compared to other religions, the tradition of non-violence and tolerance in Buddhism is strong.  The tenet of nonviolence exists in Christianity and Islam, but in Buddhism, it is more comprehensive.

Buddhism opposed ancient Brahmanism, which made animal sacrifices.  Killing is a violation of the first precept of Buddhism.  Offensive and defensive wars are both regarded as immoral in Buddhism.  At the time of the inception of Buddhism, there were numerous nations within constantly at war, making the people very miserable and critical of war.

In the legends, it is recorded that the Shyaka clan that the Buddha belonged to, resisted nonviolently against the KosalaKingdom’s attacks to suffer great loss.

In the Jakata Tales (stories of Buddha’s past lives), there are stories of princes and kings, refusing to be violent, became ascetics or yielded to the attacks of the enemy.

The Buddhist ideology of tolerance (pluralism), also contributed to the prevention of religious wars.  A symbol of this ideology can be King Ashoka (reign 268 BC ~ 232 BC) of the Maurya Dynasty.  King Ashoka became Buddhist after seeing tens of thousands of casualties from the battle with Kalinga in Orisa state of what is now east .

After this, King Ashoka gave up trying to conquer militarily Chola, Pandias, Kerala, and in the southern part of .  Instead, he tried to “conquer” through Dharma by sending emissaries to spread Buddhism.  At this time, Buddhism was being divided into Hinayana and Mahayana.  Hinduism and other religions were spreading quickly, and the Buddhist world was falling into disarray.  King Ashoka was instrumental in bringing together 1000 Arhats in 241 BC to complete the canonical Tripitaka by compiling various texts and scriptures in order to present authentic doctrine within , , and other foreign countries.

In the Hinayana tradition, this is called the 3rd Great Buddhist Council.  In order to establish legitimate Buddhism, King Ashoka did drive out heretics from the Buddhist order, but he did not use physical force.  Rather, the king protected other religions like Brahmanism, Jainism, Ajivika, and so forth at the same time.

In order to spread widely his ideals, the king erected pillars inscribed with a royal edicts to respect other religions and refrain from killing. 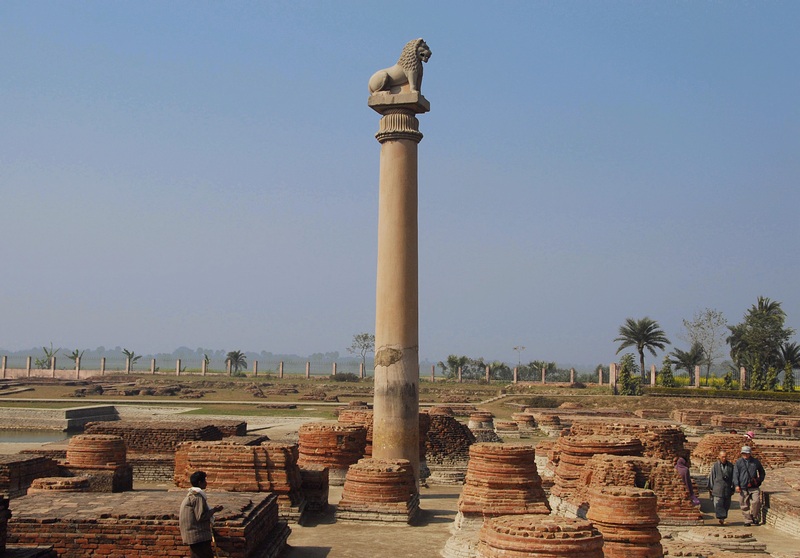 The following is from the edicts of King Ashoka:

The edicts of Ashoka are great aids to resolve the conflicts between religions of modern day.  SeogangUniversity’s professor of religious studies, Seo Myong-won wrote in the winter 2008 Buddhist Review, “King Ashoka was a pioneer in the promotion of inter-religious dialogue.  He advised to heed the teachings of other religions.”  Professor Seo claimed that the edicts of Ashoka contributed to religious reconciliation and world peace.

Development of a new Buddhism by the assimilation of the native religion, after Dharma propagation

King Cyrus (reign 559~529), the creator of the Persian Empire was a comparable figure in history with King Ashoka.  He conquered all of the orient except , but he was known as a gracious ruler for his religious tolerance and courtesy.  He released the Jews who were captured by the way of Babylonia .  He is the only outsider to be called a messiah in Jewish history.  In addition, he was considered by the Greeks under his rule to be the most fair and just.

In contrast to King Ashoka, was the emperor of Rome, Theodosius (reign 379~398 CE).  He reunified the Roman Empire in which religious division over the divinity of Jesus had existed since Emperor Constantine.  In order to stop the debate over the divinity of Jesus, he convened the council of Constantinople in 381 CE.  He then officially established the doctrine of a divine Jesus and drove out any with opposing views.

Theodosius pacified the internal conflicts within Christianity, and officially made the Christianity the state religion in 392 CE.  He made all other worships (private or public) illegal within the empire.  In 394 CE, the Olympic Games with its ancient history, was also stopped.  Since the Roman Empire , Christianity has asserted an exclusive doctrine.  Following Martin Luther’s reformation of 1517, millions lost their lives in the Bartholomew Massacre and religious conflicts of the Thirty Years’ War.

Buddhism, an advocate of pluralism, harmonized with the native religion and culture rather than go against them.  In , Chan Buddhism was born by an interchange with Daoism.  In , Buddhism accepted the local faith, and there are shrines for the Mountain God and the Big Dipper God in Korean temples.  In , Buddhism incorporated the native Bon religion.  In , a form of Pure Land Buddhism developed.

Knowing this, Buddhism has not been wholly free from war and violence.  After becoming an influential religion in many Asian countries, there were times when Buddhism cooperated with nationalistic and military movements.  Buddhist monastics from , a Buddhist state, fought in the war with Tamil in the 1st century BC.  They even decorated their weapon with Buddhist symbols.

In the beginning of the 11th century, the Burmese of Myanmar followed the Mahayana.  They petitioned the neighboring king of the Mon clan to send monks and the Pali Hinayana scriptures.  They were refused.  They then destroyed the Mon clan and forcefully brought back the Pali canon with commentaries, the king, and over 500 monastics.

In the west, there is war and terror from the conflict between the one-god religions of Islam and Christianity.  In response, there is a sudden increase in the number of new Buddhists.  We don’t know how Buddhism will progress, but to this day, Jasper’s claim remains firm.