My Visit to Korea

“Korea was like a pure land in that Koreans have so many opportunities to meet qualified teachers, to study, and to practise the Dharma.” 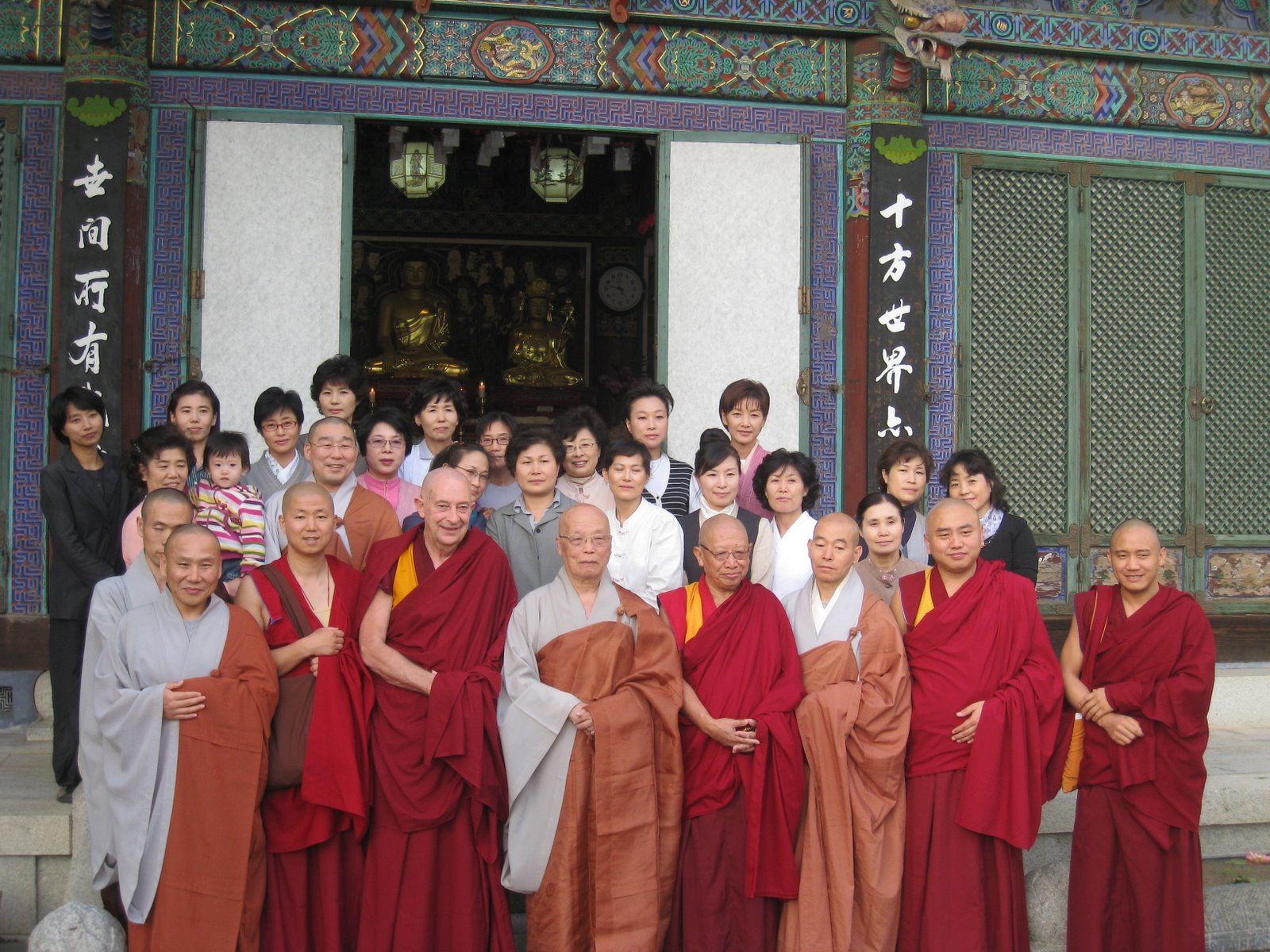 Two months after my return to I look back upon my visit to with amazement. Was it a dream? In one of my talks in , I mentioned that, compared to , was like a pure land in that Koreans have so many opportunities to meet qualified teachers, to study, and to practise the Dharma. In we are still in the pioneering stage of introducing Buddhist study and practice and, even though the people of do not oppose but are generally interested in what we Buddhists are doing, there is no active support and we have to establish temples, Dharma centres, and retreat places from the very beginning. The wonderful hospitality that I received wherever I went in was a reflection of a proper Buddhist society where lay and ordained Buddhists give each other mutual support, and Dharma study and practice is strong. This was a wonderful and inspiring experience and it gave me insights into how Buddhism can grow and function in . The magnificent Korean monasteries and nunneries that I visited whetted my enthusiasm to provide beautiful places in the Australian countryside where people can study and meditate in a peaceful environment. 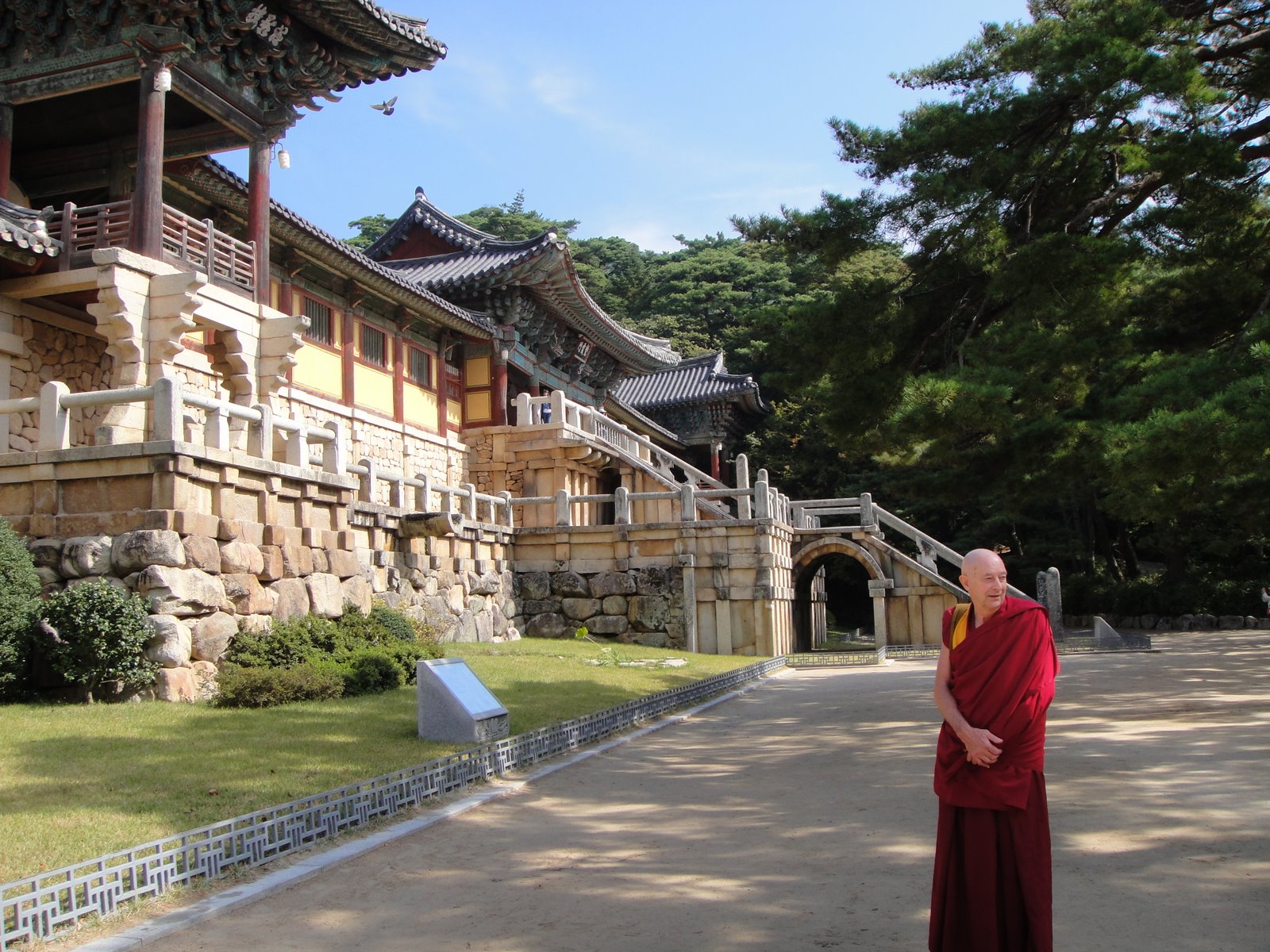 Of course, I cannot write about my visit to without mentioning the temple food. On my first visit to , ten years ago, I made the observation that the vegetarian food I was given was the healthiest diet in the world. And I remain of the same opinion. During my recent visit the idea occurred to me that needs Korean-style cuisine and perhaps I should open a Korean vegetarian restaurant. But, on deeper reflection, apart from such a project being beyond my sphere of activity as a Buddhist monk, the Australian culture is so different that few people would appreciate the refined taste and delicacy of such cooking.

I was very pleased that Homi Publishers had produced such a beautiful publication of the excellent translation of my book, A Leaf in the Wind, and that so much interest was expressed in my personal journey towards becoming a Buddhist monk. I wrote that story in order to communicate with young people who do not have the same freedom to travel that I had, but are asking the same questions that I asked. Some of my stories may have shocked people, but I felt obliged to be completely honest in describing how I came to accept Buddhism as a valid psychology and a valid path to a valid goal. Through talking to young Koreans, I realised that there is a danger of Buddhism in being relegated to the status of ancient superstition. How sad it would be if the peak of human philosophical and spiritual attainment were not taken seriously and were lost forever. This would be a great tragedy, especially with the growing popularity of Christianity in . Without any criticism of Christianity, my observation is that the teachings of Christ are a simplistic presentation of karmic cause and effect that, if followed purely, protect people from being born in the lower, suffering realms and give them the opportunity to be born in the desire-realm heavens or, at least, once again as a human being. There is, however, no presentation of the path to nirvana, full liberation from the wheel of life, and certainly no presentation of the path to Buddhahood. 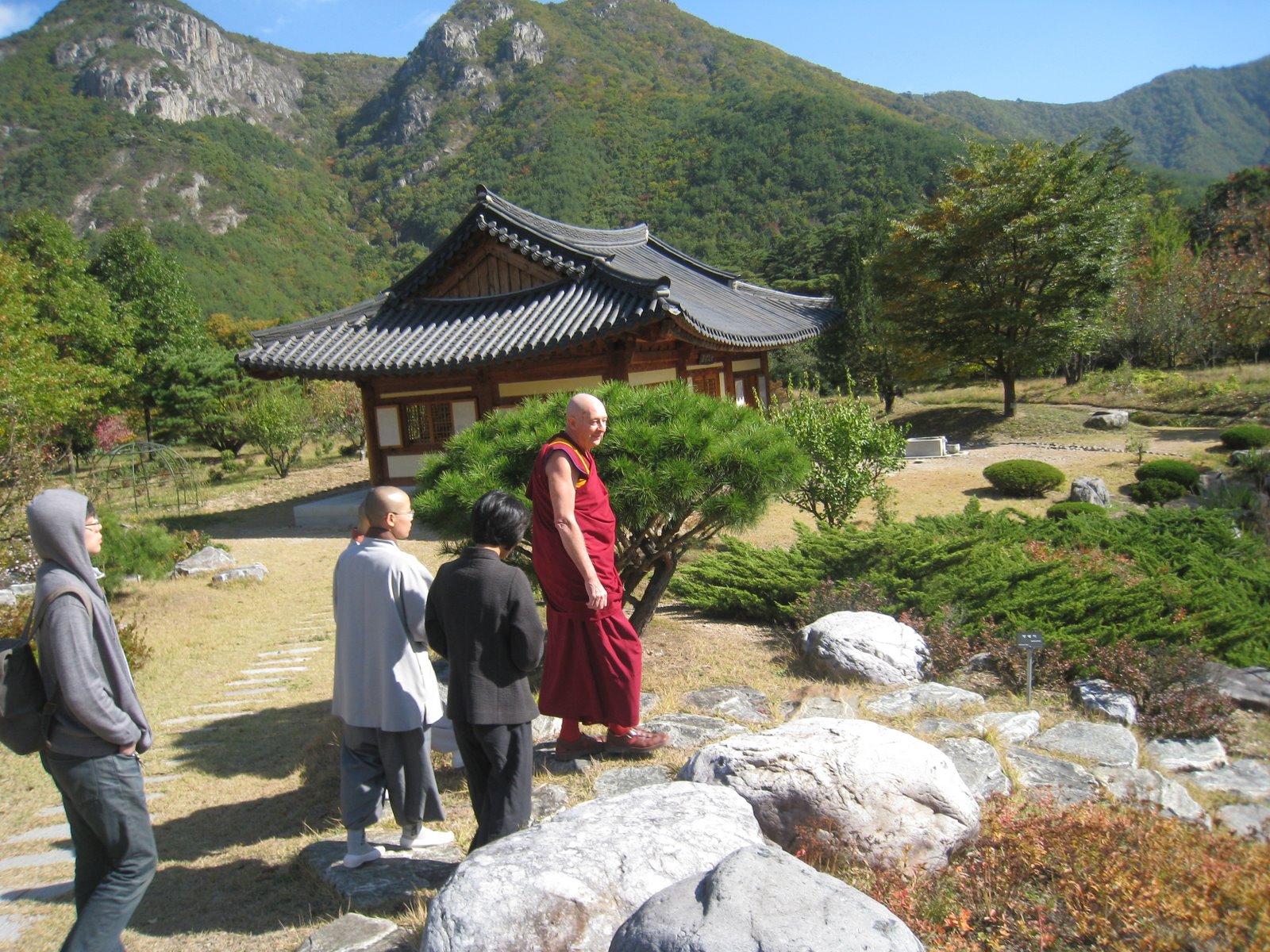 While reading the books of several great Korean masters, it occurred to me that, to accept Buddhism and enter into its study and practice, the scientifically-educated young people of today need more than inspirational poetry and mysterious koans. I feel that today’s young people need a clear and logical presentation of the mind, it’s relative and ultimate natures, the nature and way of functioning of the disturbing emotions of attachment, anger, ignorance and so on, and the nature and functioning of the constructive mental attitudes of love, compassion, wisdom, and so on. They also need clear instruction on karmic cause and effect, and on the stages of the path to enlightenment. All of these Buddhist subjects are extremely logical and acceptable to a scientifically-trained mind. In my own case, with a background of science, I see no contradiction between the scientific view and the Buddhist presentation of the mind and its relationship with the body. Also, rebirth, beginningless life, and the attainments of nirvana and enlightenment are not contradictory to the accepted ideas of evolution. In fact, I believe Buddhism provides the answers to many unanswered questions in science, especially the most important one: “what is the mind and where does it come from?”

In my own studies I have found the presentation of the entire path of sutra and tantra to be a great help. With the Four Noble Truths put into such wonderful perspective, I have really appreciated instruction on how to actualise both the intellectual presentation of ultimate reality, emptiness, as well as the meditational direct realisation of emptiness that goes beyond intellectualisation but, very importantly, depends upon prior intellectual realisation. Lord Buddha’s teachings make it perfectly clear that any conceptual thought or idea about something, even if it is a correct conception, contains an element of error in that the conceptual mind confuses its idea of the object with the actual object of knowledge. In relation to the profound object, emptiness, the correct, conceptual understanding of emptiness is thus not strong enough to abandon the root self-grasping ignorance, the source of all problems. Thus it is necessary for the practitioner to cultivate the direct, non-conceptual realisation of emptiness. This wisdom is the True Path and it has the power to abandon the various levels of mental afflictions. 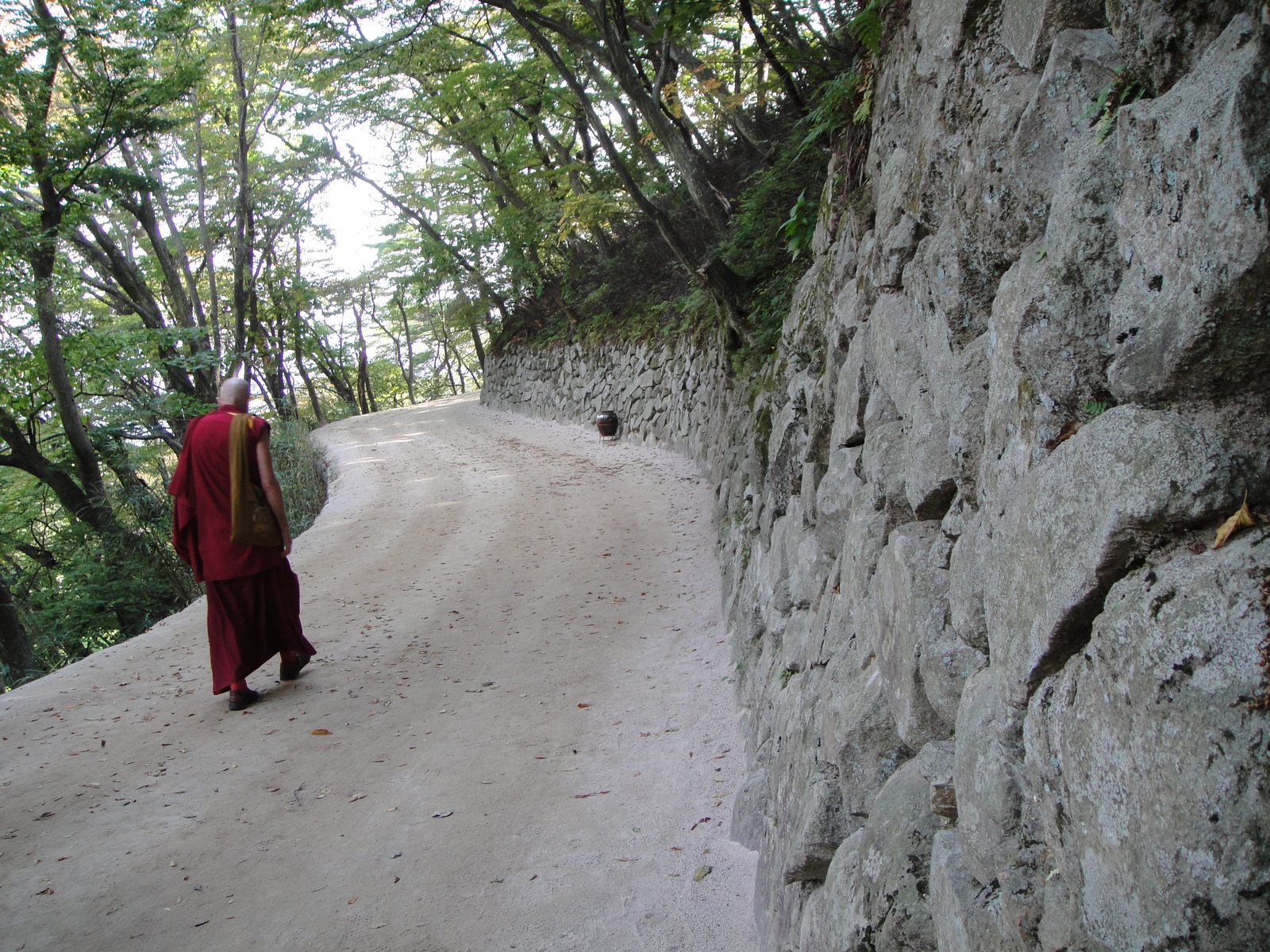 In conclusion, I must point out that I have mentioned the particular topic of meditating on emptiness with the thought that it might provoke healthy discussion and even debate among the readers of the Jogye Order’s English quarterly magazine. This is my small gift to repay the immense kindness, friendship, and generosity that I was given by the many masters and students that I met during my brief visit to . Thank you very much.

Ven. Thubten Gyatso has been ordained a monk in the Tibetan Buddhist tradition for more than 30 years. He was a medical doctor and practiced medicine before becoming a monk. Since then, he has run a free medical practice in , taught Buddhism and meditation in and , establishing monasteries in and . In the late nineties, Ven. Gyatso lectured extensively in the . He then spent some years in , where he was well regarded, and his teachings were presented on radio and television and published in the local newspapers. Ven. Gyatso’s most recent book, A Leaf in the Wind, is an autobiographical account of his search for happiness. This book is also available in Korean. Ven. Gyatso visited from October 11 to the 29, 2009. He gave dharma talks at the Buddhist English Library of Seoul, HongbeupsaTemple , UnmunsaTemple , HaenamsaTemple , Mita Seonwon, DonggukUniversity (Kyeongju campus), Joong-angSanghaUniversity , and BulgwangsaTemple . He also visited MihwangsaTemple , TongdosaTemple , BulguksaTemple , GilsangsaTemple , and the KoreaTibetCenter (Kwangseongsa) in Busan. He was very received and many hearts were touched by his good example and teachings.