What is Ganhwa Seon?

What is Ganhwa Seon?

The Meaning of Patriarchal Seon
Patriarchal Seon is the Dharma Gate (teaching) that immediately shows one the world of enlightenment that was originally attained fully by all of the patriarchs. If one stands at this gate, the path of language and thought is cut off, and one is clearly enlightened that one is originally Buddha (awakened) and enjoys a free life where one is not trapped anywhere.
There is a phrase, “physically naked golden wind.” This phrase tells of the original form of trees nakedly displayed when all the leaves have fallen in the autumnal wind. When one is enlightened the true form of the Dharma-realm that has eliminated the egoistic way of existence that is language and thought is thus itself revealed. Patriarchal Seon is just like this.
The Buddha, by means of transmitting from mind to mind the world of enlightenment that he himself had experienced, transmitted it to the Venerable Mahākāśyapa. The opportune condition (occasion) for this was as follows: 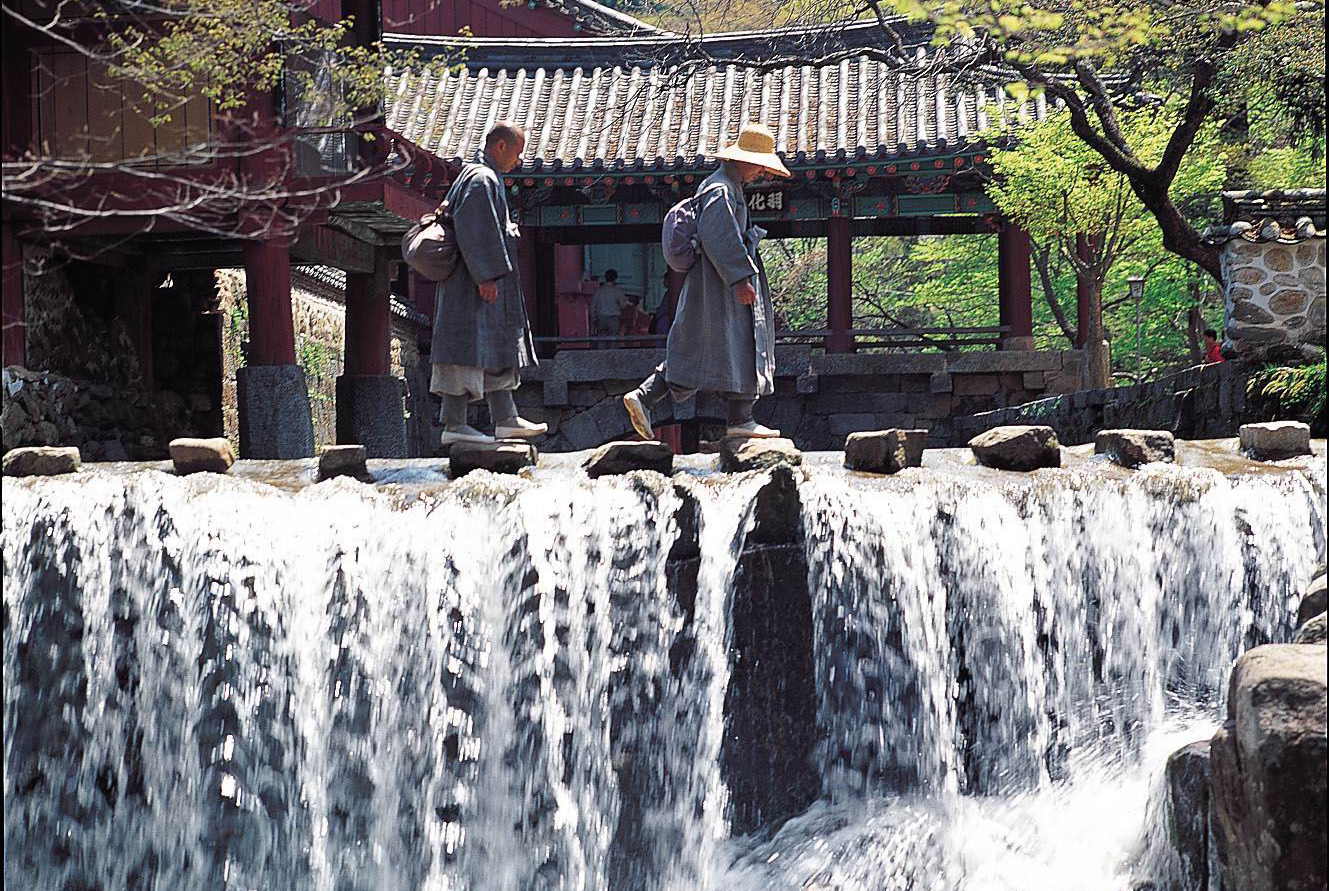 One day the Buddha held up a lotus flower and showed it to a great assembly of many people. Only Mahākāśyapa of that assembly broke into a smile. When the Buddha held up that lotus to show his mind, Mahākāśyapa was immediately enlightened to that mind and responded with a smile.
That is exactly the meaning of “when a flower was lifted up he smiled with laughter” or yeomhwa miso.
Seon was born on the occasion of the profound meaning of “held up a flower and smiled.” This Dharma that was transmitted from the Buddha to Mahākāśyapa was later also passed on from master to disciple without a break.
Patriarch Bodhidharma was the twenty-eighth in the Indian lineage who received this Dharma. Bodhidharma traveled to China and transmitted the Buddha’s genuine Seon Dharma, and he became the first patriarch of the East.
The Currents of Patriarchal Seon
The Chinese Seon (Chan) School began with Bodhidharma, the twenty-eighth patriarch of India and the first patriarch of China. In this way the Seon Dharma that the Buddha transmitted was continuously inherited through the Seon Masters; the First Patriarch Bodhidharma (n.d.), the Second Patriarch Huike (487-593), the Third Patriarch Sengcan (?-606), the Fourth Patriarch Daoxin (580-651), the Fifth Patriarch Hongren (594-674), and the Sixth Patriarch Huineng (638-713). Thus the great current of the Seon School was formed.
Patriarch Bodhidharma saw his mind-nature by sitting for nine years facing a wall at Shaolin Monastery, and through the generations the patriarchs passed it on from mind to mind. This was why it was called Patriarchal Seon.
It was the Sixth Patriarch, Huineng who substantially grounded Patriarchal Seon in China. Seon Master Huineng elucidated the dono gyeonseong that is the perfect awakening immediately to that nature by direct pointing at the self-nature that all people originally possess. That the Seon School could flow uninterrupted in China was because Seon Master Huineng fully unfolded this Seon Dharma of sudden enlightenment.
The person who firmly established the Seon Dharma of Huineng was his pupil, Seon Master Heze Shenhui (670-762). Shenhui greatly highlighted Huineng’s sudden-enlightenment method of seeing the nature that directly enters the mind. After Shenhui, those who made Patriarchal Seon flourish were the excellent teachers, Seon masters Mazu Daoyi (709-788) and Shitou Xiqian (700-790). They promoted the Patriarchal Seon style centered on Jiangxi and Hunan to the south of the Yangzi River. Seon masters Mazu and Shitou spread Patriarchal Seon widely and gathered many distinguished pupils, which rooted the Seon School firmly into the soil of history.
For example, among Seon Master Mazu’s pupils was Seon Master Baizhang Huaihai (749-814). Baizhang instituted the pure rules for the Seon cloister and made the very first Seon collective practice monastery (chongnim). Moreover, he personally practiced the lifestyle principle of, “if one does not work for a day, one does not eat for a day,” and instituted a key of the Seon cloister community that concentrated on practice while living self-sufficiently. This made the Seon School stand tall on the rock of history.
Many of the good pupils of Seon masters Mazu and Shitou produced many Seon masters themselves and they spread the Seon Dharma widely, not only in China, but also in north-east Asia.
By the middle of the twelfth century, Seon Master Hongzhi Zhengjue (1091-1152) fostered silent-illumination Seon and Seon Master Dahui Zonggao (1089-1163), while criticizing this silent-illumination, systematized Ganhwa Seon (Ch. Kanhua Chan) and spread it widely. So Patriarchal Seon was divided between the methods of practice of silent illumination and Ganhwa Seon.
The Ganhwa Seon systematized by Dahui Zonggao is a method of practice that best maintains the core of Patriarchal Seon. In other words, not only is Ganhwa Seon heir to the experience of seeing the nature that was emphasized by Patriarchal Seon, but also the patriarchal monks standardized the form of the words called hwadu that cut off the path of words and which directly showed the mind’s original face. Through this hwadu, from this point on, it was a method of practice that awakens the mind.
Copyright ⒞ 2014 Jogye Order of Korean Buddhism. All right reserved
컨텐츠 상단으로 이동